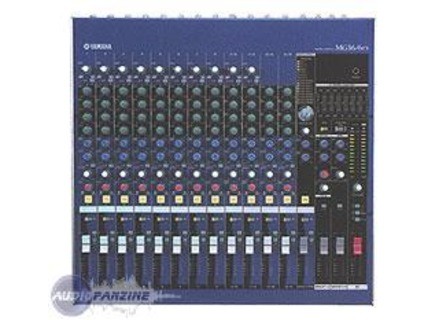 MG16/6FX, Analog Mixer from Yamaha in the MG FX series.

View other reviews for this product:
The CHARACTERISTICS have dja taient give.

I only regret that there have no spars 4 groups, but that one is obliged to asigner routes to groups 1 +2 or 3 +4.

Trs easy to use, it can not be used directly without reading the instructions, I received it yesterday (the feast of music) I had a concert in the evening, and I I could grate steak with no problem ....
The manual and clear and laid the foundations of the mix. It also gives us some kind of connection configurations ... trs well done .... Nothing to say ...

It is only two days I use it ... so I repost a notice deus later ...
But a priori pramps are without breath if one grows up to 3 / 4 recess APRS ca breath ... but ... given the reserve of gain I do not think that there I need to push further ... pramp
The equalizer is very effi ... I have scratches on my acoustic bass that stand out too much feedback and I was able to put in a Instantel same level as the rest of the spectrum .. more feedback ... miracle!
lol
The effects are effectively to embellish a little .. even when used with modrations ... but to put a ptite rverbe on the road or at a scratch live is ample enough for ... Studio must find something else ...
The console as a whole is transparent ... plutt APRS I could say that with more use ...

Last, the power supply! it is heavy but it really feels with security .... b frankly the stuff ...

I use it only for two days but have a dja Sonoris with.
What I like most?
The reserve of gain, Galis, effects.
The least?
Sparer, but not 4 bus 2 bus route to be rel 4 outputs.
Lack of a mute gnaral (on / off button does not mute on each track as the master and not els groups.)
I tried to normment MODEL acqurir before I train here and in the little difrent live, and I think the price is unbeatable.
See the source
Did you find this review helpful?yesno
Cookies help us improve performance, enhance user experience and deliver our services. By using our services, you agree to our use of cookies. Find out more.