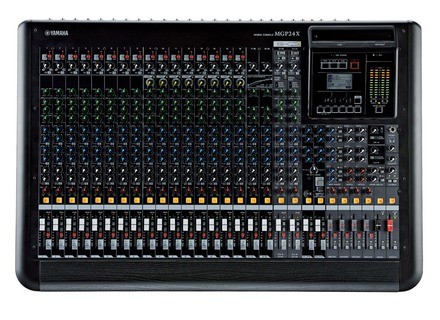 Yamaha completes its MGP analogue mixers with two 24 and 32 tracks models, respectively the MGP24X and MGP32X.

Both MGP24X and MGP32X consoles are equipped with Class A D-PRE mic preamps, which use a reversed Darlington circuit, and a phantom power. Also present are AD/DA converters, a stereo Hybrid channel and two effect processors: the REV-X reverb with three algorithms, and the SPX digital processor with 16 effects.

You'll also find a 31-band graphic EQ for the stereo bus, as well as two 14-band and Flex9 GEQ modes.

Last, each mixer is equipped with two USB ports, one dedicated to direct recording and playback to/from a USB device, and the other for iOS device. Note that the free Yamaha MGP Editor iOS app has been updated, it allows for remote controlling each effect, the Hybrid channel, the graphic EQ and the master compressor.

The MGP24X features 16 mic inputs with phantom power and HPF per channel, 24 line inputs (16 mono and 4 stereo), 6 aux sends and 2 effect sends, 4 groups and one ST busses, 2 Matrix and one mono outputs.

Pricing is still to be announced.