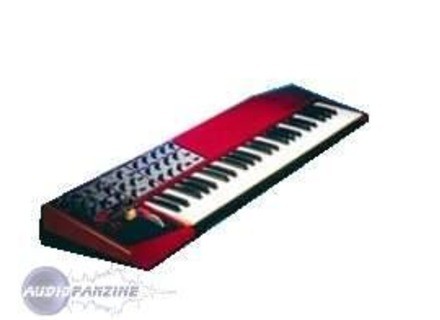 View other reviews for this product:
4-octave keyboard means.
Controller a pitch bend wood, with the characteristic INTERESTED to oscillate around the zero position: can be made easily with the vibrato pitch bend!
Stereo output, the trifecta twelve o'clock
100 sounds plus 10 kits. 40 sounds are user programmable
no effect.
4 ext 12 voice polyphony (attention, do not buy a 4 channel version now: the extension is to have super long!).

- 2 ocillos (triangle, saw and pulse + noise for one of two)
- A budget dedicates the amp
- About one dedicates to the filter
- A filter with low pass (12 and 24 dB \ octave), Passed high and low pass + one notch (especially aseez!).
- Dest as an LFO with a tilt of the two, the two oscilloscope, the pulse width or the filter cutoff. The LFO is a strength of Nordlead in sound: it has a EHJV of hell!
- A second LFO that acts as an echo-aprgiateur aps I know what.
- An envelope assignable AD FM, or osciloo 2.

Well, this is the first analog modeling synth is saying I do not know what. What is sr is that employment is as simple as a viel analog: twenty pots, knob by a single function, zeros menus! It gnial have fun for hours making sounds with it.

The manual is simple, APRS what I saw. But whoever connate a little bit how a subtractive synth with synthse will not need, except for sysex.

Well, the part INTERESTED. The sound is standard. I do not know if a mule out the old analog (it Paragliding for mulate the prohet5 is good), I do not care. Because of its extremely simple ergonomics is cre dozens of sounds qqs hours. The filter is standard, especially the resonance: background, means that we have a Nordlead, and nothing else! This synth is effective particulirement make sounds that sound artificial trs (the synth of choice for Autechre). Gniale else, the FM: I do not know why, but it sounds from hell (you can block one of the oscilloscope, so it's always the same frequencies. Trs to have good sounds compltement inharmoniqes)

I've had one and a half. Bought OCASI 4300 francs. I love it. His only two major default are not of sound and especially a non Lfo synced to MIDI. This last point is really trs trs shame, because this m'empche use with a squenceur for most sounds I with cre ....
See the source
Did you find this review helpful?yesno