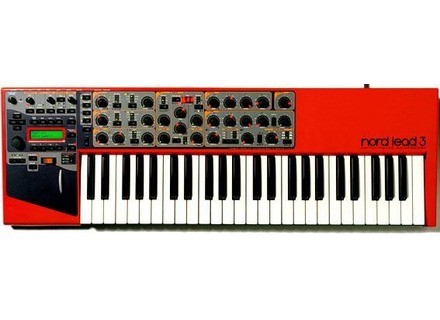 View other reviews for this product:
Synth modulation / analog modeling, call it whatever you want you have to turn the button to edit your sounds.
4 separate output, so four synths in one, any parameter, that is to say that you decide whether a particular synth out mono or stereo, on a given output.
Midi absolutely total, A Z, everything is parametrabl and recordable. Amazing!
8 bank of 127 sounds about 1000 is not far from the sounds if you add your. It's party time!
I do not use with computer (the computer has no place in my studio, I use only hardware you) but you can retrieve at the site of a multitude of sounds clavia Free + Most recent internship OS.
Polyphony exellente say anything, it's not a 2000 or a Juno106 MS (I worship)

In a rare simplicity in menus (no million sub-menu with BBREVIATIONS gives bad head). The control panel with the knobs are very simple, everything is very clear, not a search as "Andromeda" Alesis o diploma must have a driver to navigate the air .....
Modulated sounds is a breeze and the possibilities are endless.
The manual .... I have had recourse I have to admit for some stupid detail, as synchroniqer the LFO to the tempo, for example (shift + knob turn the LFO to the right!) nothing too bad in the end.

Making the house-electro-techno, and even more musical stuff very funky, sounds are impeccable ', all fawn over the same sounds are editable and become moldy quickly you! For me the factory sounds that sounds serious I do not touch it, and those who are really unusable as is, I twist in all directions
Not really realistic sounds, a keyboard is not a lover of classical piano ... Rather place the sounds spacial, funky bass, cold ground (yes the heat is not its special sound unfortunately)
I have the prefried are low I Will of module-based oscillator and LFO + glide & Company, a real treat, I hate those, sounds that are nothing at all like the cheap pianos arpeggiator or ready made but no one (you do the same you, it's crazy the arpeggiator, all programmable 100%)

I use it since 2002, it is for me the most efficient synthesis of march I tried over 15 MODELS, and really it is for me the brain of my prods.
Being able to assign all knobs the knob is really a quality clean and beautiful (not on the rack version!)
His big flaw is the lack of heat sounds ... has a juno 106, the difference is obvious.
Ok it's not given count nine euros in 1900-2000, but that for that price you have 4 in a stereo synth .... and yes!
I'm so AIM this synth that I bought two, for good I separated a aquérir for something else, but without hesitation I direct remake that choice! Besides, I do not sell
See the source
Did you find this review helpful?yesno
Cookies help us improve performance, enhance user experience and deliver our services. By using our services, you agree to our use of cookies. Find out more.