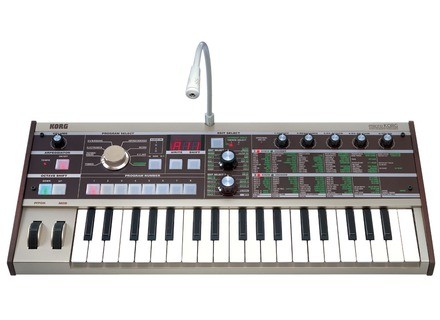 Buy this productView price information >
View other reviews for this product:
Note 8; not so provided in the abstract, but very well equipped for the price.

Note 7; the matrix is ​​a bit dicey, and should be handled with white button settings (there are two) for the μK returns to edit mode in the right line matrix (indicated by an LED). But all settings are accessible from the front panel.

We agree, the keyboard laying there like a bad joke, and I grant you, the keys have such a spring, that sound bounces are common (much like a drum roll); its velocity response, although real, is anecdotal, because it is difficult to be determined (it is almost always fully). Some agreements are infeasible. However, this mini keyboard gives this unit a very attractive space which predisposes to nomadic applications. It will do nicely to control a DAW or hardware sequencer as part of a programming step or real time "post-corrected", especially as the essential parameters of the master keyboard were not forgotten.

Its low polyphony also contributes to ridicule again, and relegated to simple plug-in applications, like the supplied microphone, too sensitive to "pops", but its aspects "toy" end there ... In fact, the Sound quality is waiting for you, both in terms of lack of breath and precision audio, as timbral character interesting and triturable. Not very experienced in programming sounds, I will not go into this area, but some presets you confirm that this is a real synth, with inspiring sounds.

Question vocoder, it is certain that 2x8 strips (stereo) will miss intelligibility, but this function is particularly flexible in use. Indeed, it is not limited to modulate the internal sounds with your captured by the supplied microphone voice. The microKorg has a (compatible dynamic microphone mono jack, and line level via switch) modulating input AND a carrier input (Jack mono line-level only). So, more polyphony limitation, since you can map agreements crazy on another synth that generate the carrier, which can modulate anything (of course your voice but also drum machine wave radio, etc ...). But in this case, by treating only external signals, the output level of μK is a little low, but nothing that really undermine the report signed / noise.
These inputs for external signals can also be used to process said signals with the filter and the internal effects (delay + phaser or flanger or chorus). The latter, incidentally, fishing by the lack of precision of temporal settings (delay time and LFO rate to encode from 0 to 127 bananas, not ms or Hz), but they are synchronized by midi note.

Existing very long catalog (always as successfully) and offered at a reasonable price, the μK lets have fun and discover the joys of vocoding in its main forms. But also, with the use of some serious devices (micro HPF + pro + compressor, or samplée voice), can be used for well established compelling applications.

Beware if you are interested in microKorg XL: news I bring you now is to verify (call to users of XL), but ask you to avoid any unpleasant surprises. Indeed, it would have only one external input. Following the switch to activate either the control panel XLR (MIC) or Jack on the rear panel (LINE). You can only use the internal sounds μK XL carrier, which is a lack compared to basic μK! Yet enjoying double polyphony (except vocoder fashion: 4 ditto μK, so eventually agreements crazy ...), double filter strips, sampled sounds and a seemingly keyboard better, the XL n therefore is not so far improved in every way ... μK
See the source
Did you find this review helpful?yesno
Cookies help us improve performance, enhance user experience and deliver our services. By using our services, you agree to our use of cookies. Find out more.