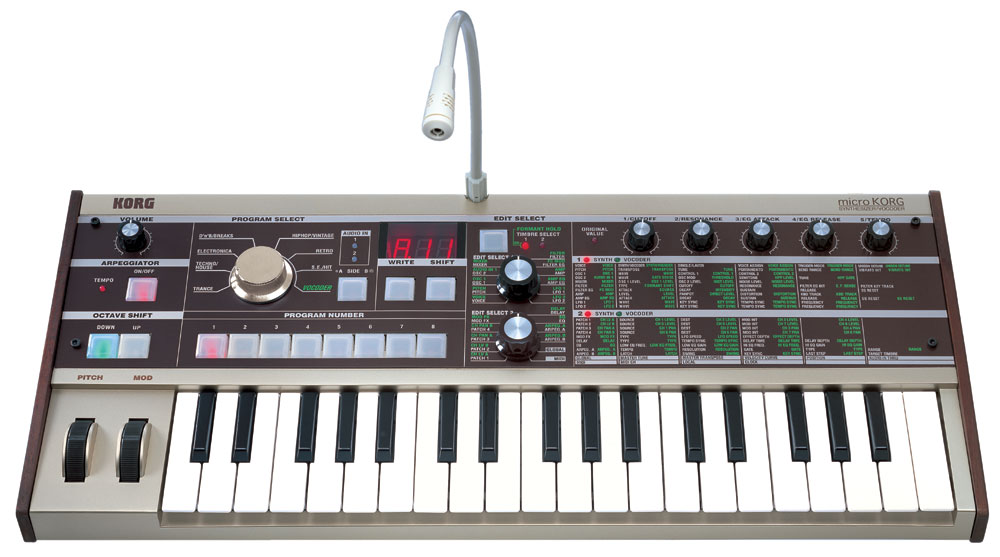 View other reviews for this product:
seb51
Publié le 12/21/06 à 14:26
The microKORG is a mini keyboard has three octaves, including in its facade 5 very nice knobs for realtime effects (like those found on the moog!) With a volume for more than two buttons for a further edition!.
a pitch wheel and modulation.
another big knob to the selection of a small display programmes.un thus q LEDs for micro flexible vocoder.

a patch editor is available in several platforms.
polyphony is limited but it can be sufficient to play a few chords or just to play melodies.

I think he has an air of old vintage synthesizer from both flanks of faux wood and buttons to the moog style!

Other features to see on the korg site.

I find the edition sounds quite complex because you have to go into a kind of matrix and edit the parameters one by one, it's hard to edit sounds, we must say that I have difficulty with the synthesis, I do not know where the notion of change for a particular sound (a slick, low) so I generally use ready made patches that I transfer directly into the microKORG via a MIDI cable and a small soft .

what I find cool are the knobs that resemble those of the moog or we can modify in real time some parameters in order to live with fun sounds.

Taking a real pleasure to play a sound and varied to do with the buttons in real time!

I use it occasionally and I am always happy with its superb sound very warm-sounding analog-style very well, you come back ay sounds like moog also those of Jean-Michel Jarre edition with even more I think the pressure can be derived in many other things too wonderful!

sound factory allows to have a first approach to possibility and realize that sounds great on warm analog sound.

to have something decent you have to recreate the original presets because they do not allow pushed to max all the capabilities of this little synth.

I like the idea of ​​starting Korg MS2000 but I had already read reviews on the microKORG on the net.

so I try the MS2000, which I liked on this keyboard was the many buttons edition issue sounds but it did not attract too, one can then discuss with me the seller is more oriented towards the microKORG.

was first seen in real ca seemed rather a toy I put the headphones on and then I started to browse through the factory sounds and I still took a hell of a slap!
very good and big sounds in the analog, for analog modeling is very successful.

I recommend it to anyone they would like to have a little analog synth was everywhere enmené not very expensive as Excellent quality / price ratio, plus it also feeds on batteries and with headphones on and can play anywhere when it takes us!.
has seen the first one has the impression of dealing with a toy But make no mistake, this one did not, we all the same case has a great brand that has some experience in the synthesis that made the Korg reputation.

namely over the microKORG has the same sound engine as the MS2000 and thus the patches of the latter are 100% compatible with the microKORG.
I was thinking of selling it and then every time I hear its beautiful sound I crack as always!

I would do well on this choice but I do not think I could really separate myself.
00