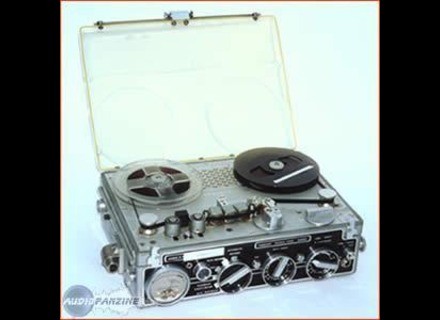 It's amazing with a mechanical device simple and efficient than its competitors and successors have not packed with unnecessary complexities often required over time. This does not prevent, in its simplicity, being oh so better than all the other recorders on the market ....

Now we can still go further and ask them a few modifications to the scope of those who desire, to record and play in stereo, with very good results because the quality of its scrolling is much better than its successors, then yes it is similar flickering stationary machinery studio in mitigation of side bands, higher than - 40 db, no other portable, no!

Then do so live and relive .... you will not be disappointed .... Thus it will justify its place in this topic multitrack recorder. Be aware that laboratories ORTF had done in the beautiful 60s last century .... probably do so just before his successor Nagra IV-S, a little less mechanically efficient elsewhere. In the Nagra III, everything is in the double roller stabilizer of the band before the attack in the heads and tape path in wrapping the capstan by the band before its contact with the capstan-cons. The Nagra IV saved a rotating part on the two brass which was also heavy MATTER .... it is true for a portable magneto.

And then I will add speed to integrate him, certainly not compatible with the existing market, but try to run it at 28 cm / s, intermediate between 38 and 19 cm / s with a time constant of 50, 35μs or even read it will gain from all sides like all his colleagues elsewhere, independently of band noise in the scroll, in wear head-to-38 cm / s, and especially in relation to dynamic 19 cm / s generally rather limited or poor on the latter parameter. As long as you dotiez a modern kind GP9 tape, then you will have transcended ....
See the source
Did you find this review helpful?yesno
Cookies help us improve performance, enhance user experience and deliver our services. By using our services, you agree to our use of cookies. Find out more.