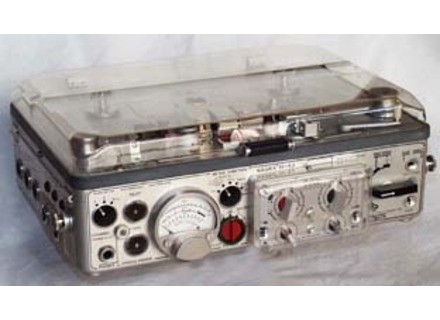 This is certainly the most powerful analog tape of the global market in portable, I pushed him to 45 kHz at -3 dB Record / Playback 38 cm / s on a modern style tape Ampex GP9, 496 or 499 or similar grained oxide ultra-thin. Bandwidth is flat from 20 Hz to 40 KHz, who says more with a digital, they are not numerous. The read head has a gap thinner than the Nagra IV-S his brother to enable him to make the instrumentation. But it can make the audio standard provided a closer look at the settings and there it can become dangerous from the Nagra IV-S. Nagra is the worth around nine or 70 100 000 without accessories Fr 10 years ago, today we find on occasion at good prices but you have to see their status, settings, choose with care in expert with the original documentation to understand and operate by making explain its operation because it is worth examining this issue. Good for those who can find it with the preamp B & K microphones QSJP and cell 4145 a "see also 1 / 2" in working example, so many people look at them with negligence as a product of the past without know what they are worth .... in this world there is always formatted or in the trash after use.
In one sentence, you do not veer Nagra IV-SJ, they are famous, still need to know to use it!
And I add this additional comment:
Certainly the most suitable tape recorder to the audio provided kindly be taken in one hand and a soldering iron on the other, no big changes to make:
- Replace the power to wipe the oscillator 14 V instead of 10 V with an integrated controller and you can polarize all bands, but what a fine head for reading, even better than the 4S for a signal / sound similar, never change his Nagra SJ 4 against another, it is not worth the effort!
- Change in stereo headphone jack, it's useful!
- Turn the center channel which is not used except for a digital tape counter, why not for the most ingenious! But they are more numerous because not brave enough for the soldering iron, bp of society! Or change the head with air gaps of 2.75 mm high, why not?
- Direct entry into the making of the recording amplifier with a preamp via a potentiometer 560 mV nominal double for not using the front of the meter;
- Or use the amp with the attenuator in steps as easy to enter with an audio preamp.

There are 1000 ways to reuse and one in audio and acoustic music, I might add, the Nagra IV-SJ Fools numericians while the grass or throw trash in selling off Ebay to collectors who seek always to cheapest and most are not aware of the finer techniques of magnetic recording ...........

It has all the options, integrated connections at all levels, so that we can all do, even the audio, it amounted to 45 KHz 38 cm / s with a magnetic strip with its modern playhead finer than the 25% 4S, no one had ever told you, I assure you because I know it!

And if you add the B & K preamps that go with cells and a "B & K 4145 or 1 / 2" 4133, while others have an incentive to behave to be equivalent .... it's mind-blowing quality and finesse! But we must, again, read some tips on technology the influence of moisture on these cells as all the microphones in general, to store warm and everything will be fine even with old cells .... .. There is no audio technology without knowledge of the components, such as analog to digital for that matter.

I did not put a score of 10, it would be wrong in the last 20 portable digital but for its quality and performance! I know what it is digital, I know how it is done, sometimes very badly needs to ignorance on the part of "designers" and the cost, I know its limits in PCM and DSD, I practice too.
See the source
Did you find this review helpful?yesno
Cookies help us improve performance, enhance user experience and deliver our services. By using our services, you agree to our use of cookies. Find out more.