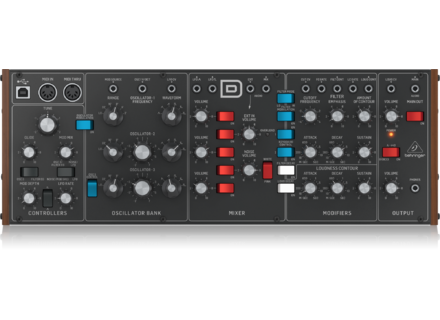 Value For Money : Excellent Audience: Anyone
Buy this productView price information >
First step, unboxing: the unit is nicely finished, seems sturdy for a Behringer product, the knobs feel “hard” and the size is compact but not too much either (unlike the ridiculously small Roland Boutique).

So you plug it in, tweak the knobs a little and within 5 minutes you’re starting creating sounds! The learning curve goes very fast, and it’s ergonomically great. Again, the knobs are small but not too small either, just the right size to remain pleasant to use.

The envelopes sound crispy, really punchy and are extremely precise.

The filter is excellent, though lacking a little musicality, especially the resonance which rises up quite quickly even in the beginning of its course – so, you have to set it very precisely to get a softer sound. The cutoff sounds very bright and goes way further than on most other synths I know. It reminds me a bit of the ARP Odyssey, but in a less aggressive version.

The LFO can be either very slow or very fast, with a huge amplitude. It reminds me a bit of the Yamaha CS15’s LFO, which is awesome (though the CS15’s remains better).

Oscillators have a real presence all around the sound spectrum – in the mids, highs and lows. Still, I was expecting a little more subs, but as I don’t know the original Minimoog I have no idea as to whether the Moog’s famous low end is a mere legend or not? However, compared with my Korg MS20, it doesn’t go lower in terms of frequencies. Its interest is more in the overall spectrum width, as while the MS20 lacks mids the Model D does the job everywhere and remains musical-sounding in all kinds of registers.

But to me, the most interesting point is the sound’s personality: you immediately recognize the sound texture that you’ve heard in countless classic tracks, as if it were tattooed within our minds. To name but a few, you can quickly get the bass from Thriller (yeah, it’s the one, real Moog sound), perfectly reproduce the lead sounds of Herbie Hanckock, ELP, Richard Wright and many others. But what I like even more is the ability to use this potential for modern production, to get more out of it than the usual prog-jazz-funky leads we’ve all already heard 1000s of times!

In the end, what impressed me most were the really crispy-sounding envelopes and the sound’s presence and identity. All that for just €350!!! When you see the price for a vintage Minimoog or even Moog’s new edition of it, you wonder where the problem is?? Is it going to self-destruct in a fortnight? Are they going to ask for it back?... Well, no, actually it’s just that Behringer is not an elitist company and has made such a legendary instrument accessible to all!
Did you find this review helpful?yesno
Cookies help us improve performance, enhance user experience and deliver our services. By using our services, you agree to our use of cookies. Find out more.