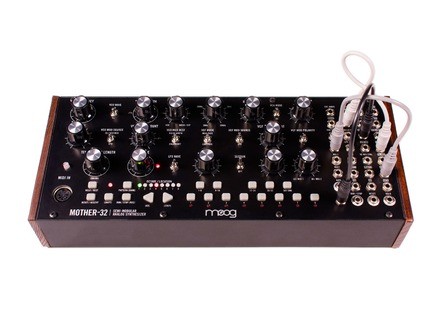 « A sequencer + a patch panel, resulting in… THE ONE AND ONLY MOOG SOUND! »
4

Value For Money : Excellent Audience: Anyone
Buy this productView price information >
For which specific applications or uses have you chosen and do you currently use this synth?

I use it to produce electronic music, and sometimes sound design – all only in the studio though it’s largely useable on stage.

Does it seem sturdy and well-finished? Is it easy to use?

The synth seems reliable, the knobs are sturdy and the design looks retro. No problem with all that except for the absence of a power switch so you have to plug and unplug the switch – something I find a little stupid.
Using it is both quite simple and natural: a VCO, an LFO, a Cutoff, a Reso and a few other knobs plus some switches. The same goes for the panel switch, which is very well described in the (English-only) manual.

What do you think of its overall sound? What about the factory presets?

Well, we’re talking Moog here, so you clearly get a warm, lush, powerful sound (I’ve never owned a Moog before, but I could hear a difference compared with my Arp Odyssey). The Pulse wave is very cool-sounding, with many a possibility using the Pulsewidth, LFO, chorus and the switch – and I’m not even mentioning the patch panel yet. The same can’t be said of the sawtooth wave, which is poor-sounding, reminds of a Gameboy and offers many less options compared with its aforementioned counterpart. The reso is also rather disappointing, though you can get something interesting out of it using the patch panel.
As for the sequencer – well, that’s for a real killer! 32 transposable steps, easy to use, that’s a real pleasure, I can’t even take it down!
The patch panel is also rather cool, though it remains quite basic and addresses beginners into the modular world – which happens to be my case. However, its biggest asset according to me is how it allows plugging another synth into the input so as to benefit from the Moog’s filter, sequencer and other features, so you got all you need to geek with it!

Pros :
- The warm and lush Moog filters.
- The divine-sounding Pulse wave.
- The very intuitive and efficient sequencer.
- The very nice patch panel, which allows having another synth’s sound benefit from the Moog’s filter, sequencer and other features (use your imagination!).
- The old-school design, and the overall building quality which seems reliable.
- Price is rather fine.
- Easy to use from the start, provided you know your basics as to analog synthesis.

Cons :
- THERE’S NO POWER SWITCH, HOLY SH*T!!!
- I found no interest in the Sawtooth wave and tend to ignore it entirely.
- A single VCO (Which is not a real problem per se).
- English-only manual (not a problem for me, but other non-native speakers might have problems with this aspect).
Did you find this review helpful?yesno
Cookies help us improve performance, enhance user experience and deliver our services. By using our services, you agree to our use of cookies. Find out more.