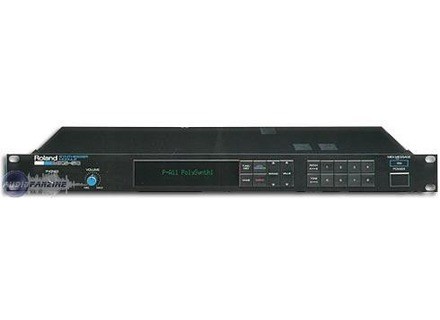 View other reviews for this product:
Released in 1987, MKS 50 is the rack version of Alpha Juno, the youngest of the family of JUNOS, polyphonic analog synthesizers based on a COD through. The architecture of the engine sound is pretty standard and limited to essentials. However, specific points give it a well-marked. The single oscillator has interesting waveforms corresponding to different variations of the usual square and saw-tooth, with support for PWM. Although this is not a second oscillator itself, there is a sub-oscillator is used to enlarge the sound in the bass. The instrument features a high-pass filter, a 24dB/octave low-pass filter and an LFO with a good range of frequencies. Also included is an original envelope rather than 7 parameters. Finally, the sound can be coated with the famous chorus of Roland at the time.
The rack itself is very robust and MIDI driver in a very satisfactory manner. The instrument is sensitive to velocity and aftertouch, allowing a game very much alive. Memory is 128 sounds, which is twice the keyboard version.

Usability is not the strong point of the machine. Already the Alpha JUNO jobs disappeared in favor of the knobs obscure numeric buttons and scroll wheel famous "Alpha Dial", with the MKS 50 is lost even this last and we are left to use her fingers to draw by pressing heart's content on the pushbuttons or wheezing! In addition, Roland honored us distinguish between "patch" and "tone" which is quite cumbersome to handle and cut into 8 banks do not facilitate the work with program changes. In short, this is not the joy ...
I put it though the average because it is rather well with MIDI control. You can program the sounds via software or as a controller and you do not touch the rack too, it's still bearable! The advantage is that with such use, he should be able to still work for many years.

I like the sound of 50 MKS. It is true that this synth may sound like the analog of the poor, compared to other previous JUNOS and even sounding a bit more "round". But say it is worse would be unfair, I would say it is different. I suspect Roland have tried to take its range analog to the sounds of the Yamaha DX7 FM and Alpha Juno as JX8P are the best examples: the sound is clearer, brighter, thinner. The MKS 50 inherited this tendency. It will never be the best machine for the big analog sound standard, but it can produce a singular and very interesting. I love the smoothness of the water enhanced by the sub-oscillator and chorus. At higher frequencies, it is highly crystalline. At the same time, do not believe that it gets in lace: it can produce low-impact, well just look at his famous "hoover", his specialty, he has to know the belly.

To illustrate all this, I have created a small demo (based mainly on presets): http://www.arts21.net/fr/french-roland-mks-50

I can not say I appreciate this synthesizer for ergonomics or to the extent of its possibilities as sound on these two aspects, it is rather limited. I love it for its original sounds that have both the analog and the presence of a very particular subtlety that remains unmatched. It is rather difficult to describe, it obviously depends on personal taste and the music he wants to produce.
See the source
Did you find this review helpful?yesno
Cookies help us improve performance, enhance user experience and deliver our services. By using our services, you agree to our use of cookies. Find out more.