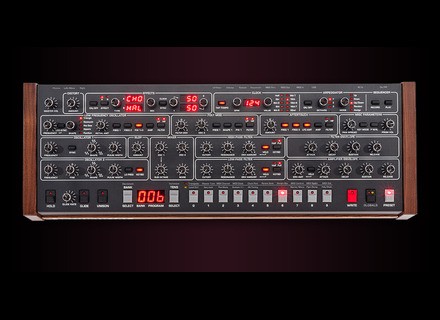 Value For Money : Excellent Audience: Anyone
Buy this productView price information >
I was sent a request to give a review on this device, but I’ll get more into my feelings than technical considerations.
As for technical aspects, you have professional reviews here or there.

For which specific applications or uses have you chosen this product?
Electropop, rock, metal (an upcoming project), country (…just joking! – hey, why not after all?)

It’s easy to get used to the interface (you don’t get easier than that “one control per function” interface, do you?). It’s ergonomically simple, provided you know how to use a synth.

What is your overall opinion on its sound? What about the factory presets?
Well, if I were to just say “it sounds really great”, that would be a bit short, wouldn’t it? First, the factory sounds are great and give a large round of the synth’s capacities.
I find the sound very versatile with a natural tendency toward aggressiveness, though it can easily be tamed if need be. Whether you consider basses, pads or leads, all sounds are lush and convincing.
Considering its setup, don’t expect it to be the sharpest synth in terms of sound design. It’s neither a Pro 12 or Pro 2, but there’s still plenty to get out of it – plus, its grain is so pleasant!
There are also onboard effects (delay, chorus phasing…) which are well-made and enlarge its capacities. The sequencer and arpeggiator are both fun and easy to use.

While we’re at comparing and to give you a sonic reference, I’ll say that if you consider a Moog to sound fat (I own a Slim Phatty and it does, indeed!), well the body type metaphor for the Prophet 6 would be to call it “elegantly muscular”.
It has the power of a dancer or even a master in martial artsso it can easily create convincing bass sounds that are true to its analog nature. Conversely, the Pro 2 has dry muscles and gives the sound a rounder, smoother identity – well, all that’s relative, as to the Moog it would be a real sumo wrestler!!!

What’s most pleasant is how balanced it is: it can do almost anything while conveying its own sonic identity, plus it’s easy to use AND easy to integrate in a mix – what’s the point of that fatness race in the end, huh?

There are 3 reasons to play a synth:
1 alone at home for one’s own pleasure
2 to find inspiration
3 for a musical project (in studio or on stage)
I frankly have a hard time understanding those who sell their neo analog synth to invest in costful vintage machines. Guys, say hello to maintenance issues (and costs), lack of reliability, lack of versatility or any further evolution, the absence of memory (yeah, you could use notes… and why not hand washing your laundry too? USB outs are great, period!). And, what’s in the end?
The pleasure to play at home (well, when it’s in tune and not out of order)? Why not. Inspiration? OK, but the P6 is inspiring, too. For the rest, that’s much problems for very little in the end, just hope you have a great customer service (which is rare with those vintage gears).

In the end, the Prophet 6 does NOT feature the biggest sound in the history of synth, but it has all the advantages modernity can offer with a convincing, inspiring and endearing sound, rich and powerful enough for you to leave your favourite virtual synth behind!

I’m also the lucky owner of a Pro 2 for more complex, rounder sounds for the (rare) occasions when I need that sort of sounds, and of a Slim Phatty for Moog-type sounds, but this is pure luxury (and frankly, you can do without it). But in no case I’d go back in time to the era of old school synths – I used to have and love the Pro One, SH 101, MOOG PRODIGY, ANDROMEDA and so on, but now in the 2010s they belong in a museum!!!

So, I’ll take the risk to be labelled a troll and say “the Prophet 5 is dead, long live the Prophet 6!!!”

Of course, don’t take that too literally, of course I still love these old machines but we are living in wonderful times with the analog renewal and the Prophet 6 will be tomorrow’s vintage – you’ll see!

In the end,
What are the pros and cons of this product?
Pros: all that I’ve already mentioned
As to its cons? Well, I don’t know! If I were to find something, I’ll keep you updated!!!