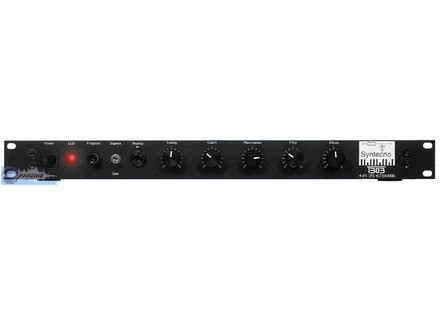 View other reviews for this product:
19 "1U rack built like a Panzer
Standard MIDI connectors
8 jacks on the rear (4cv/4gates)
A switchable oscillator square or triangle
knobs of rock solid
A front panel push button for programming (for that is angry with MIDI and hexadecimal)

It is a pure analog, you plug a MIDI cable + audio cable and an instant is to hear the sound. (Unless you do not use it for a while, is 1 / 4 of an hour for it to recalibrate, and there, the guy is dumb)

if you want to go further (it is even recommended), the best in my opinion is to export the parameter twelve o'clock to his favorite sequence once and for all. We keep it in reserve on a track and whenever necessary, the spring cap MIDI message which is modified at will. Unless you create a real-time controller, but that's another subject ...

Once the rack screw, difficult to access the connection cv / gate so precious to turn his good old analos:
Personally, in my cabinet analos, I brought in a blank facade 1U 8 minijacks the cable to the back (+ the 6 minis in the maq 16 / 3 Doepfer even criticized for that matter), so that They are available without twisting the neck. It is based in the middle of a modular system ...

Analog bass sounds with lots of character. Not if you clone TB would have us believe (I had a bassline at the time), because I find the sound of Teebee harder. An original bassline Roland is a little more cozy.

Bah, mine blows a little. I can not generalize, I have heard that!

I use it all the time: not always as audio output, but the four-MIDI converter cv / gate that has never failed. I drive in midi modules Doepfer A100, SH101, CS15, ARP Odyssey + other goodies as diverse at all control voltages ...

The sound is powerful, and the device is reliable. Zero crash!

I have a manual in English, but the device is easy to handle.

The management of the single MIDI message that does it all mean to Teebee finally simple to understand that notions of noon. Programming the dedicated button on the front must remain anecdotal: it is in troubleshooting when there is no MIDI!

Purchased less than a hundred euros, I do it again this choice no doubt because the side seems higher.
See the source
Did you find this review helpful?yesno
Cookies help us improve performance, enhance user experience and deliver our services. By using our services, you agree to our use of cookies. Find out more.