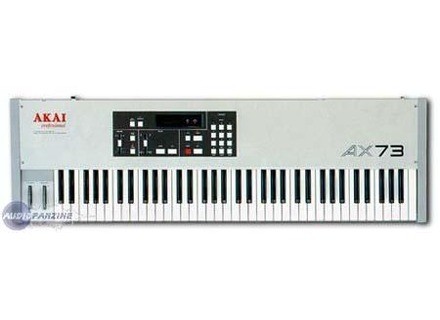 View other reviews for this product:
(Originally written by Guillaume35/translated from Audiofanzine FR)
- Velocity-sensitive 6-octave keyboard without aftertouch.

The unit is an analog, monotimbral synthesizer with one VCO and 6-voice polyphony.

- 2 envelopes for VCA and VCF. You can use the same envelope for both. The second envelope can be used to control the VCO's height.

The control panel is quite simple: it has a numeric keypad and two sliders, one for volume control and the other for editing.

The editing layout uses submenus. Although the unit has no rotary controls, editing is fast because of the simplicity of the synthesis architecture (one VCO), the direct access to each parameter, and the edit slider that allows you to step the values extremely fast.

The pitch wheel can be used to control the pitch and/or the filter cut-off (with adjustable intensity), which is particularly interesting since the unit has no rotary controls. The modulation wheel controls the LFO modulation depth.

It's very easy to learn how to use the AX73.

It's the only analog synth with VCO I own so I can only compare it with a Roland Roland JX-10 with DCO. The bass response of the AX73 surprised me, especially in unison mode and even without detuning. The tuning and timbre imprecision provided by the VCO is wonderful, but you'll have to use the autotune and the small fine tune control on the rear panel to tune the synth to other instruments.

The chorus sounds warm but, to be totally honest, you won't need it to get a good sound.

You can create good pad sounds but that isn't this synth's main use. The attack of the lead sounds isn't as percussive as with digital units.

The white noise allows you to create nice effects. It's independent of the VCO so it's possible to play with the balance VCO/noise + sampler.

I like the PWM function. With speed set to 0, it allows you to change the wave form of the VCO.

I've been using this instrument for 2 months. I bought it broken on ebay for next to nothing because the description given by the vendor led me to think it was only an internal battery problem, and it was!

The AX73 complements my bass and effects rig which I control with a Midi footcontroller.

The synthesis architecture is pretty basic since it only has one VCO, but the dual and unison modes provide rich possibilities where only one VCO can replace several DCO!

It has enough storage capacity (100 presets) and you also have the possibility to export audio files.

This synthesizer is pretty rare, interesting for its sound quality (especially the bass sounds) and for its VCO. It's an affordable instrument. I bought it really cheap and even though I had to service it (batteries, battery slots, autotune switch, one broken switch and keypad contact) it was a very good deal which I don't regret.
Did you find this review helpful?yesno
Cookies help us improve performance, enhance user experience and deliver our services. By using our services, you agree to our use of cookies. Find out more.