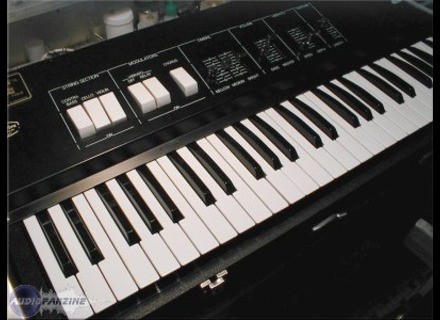 Value For Money : Poor
The Crumar Stringman is "Strings Machine" released in 1974, to enable keyboard players to produce sounds of strings, in the days when the only way to have strings on a record were the Mellotron (for the rich ... DIY) , monophonic synths recorded several tracks (for the rich ... patients), or a session of 30 professional musicians in the studio .... (for the rich ... demanding)
Crumar released this machine has to compete with the ARP Solina was released three years earlier.
This device is inserted into a black vinyl suitcase. The keyboard has five octaves.
It has three instruments: Contrabass, Violin and Cello. The bass is mono and is played on the first octave (an octave and a half, from C to E to be precise). Cello and Violin are in fact the same two sounds but offset from a height (8 'and 4'). They are fully polyphonic.
A section 'Stamp' sculpts the sound as an equalizer: 3 zippers 'Mellow' 'Medium' and 'Bright' correspond to the registers low, mid and treble.
2 pulls volumes, 'Bass' and 'Master' to allow the balance between the three sounds, and a command 'Sustain' modifies the release of sound.
Finally, a section 'Modulators' has a vibrato acting on the set of sounds, with the commands 'Speed' and 'Depth' (speed and depth) and a switch 'Delay' applying a delay of one second vibrato.
And there, hang yourself, a button, something crazy: THE CHORUS!!
This order has been placed well away from other, just to say "Warning: You start the chorus, we are more responsible .. "
A Chorus interstellar. The sound of the strings is quite different, filtered, modulated, pan appears expanded in short, a good effect.
At the rear, there is a master output jack and a volume pedal.

Everything is very simple, screen is very clear, if one is a little bit attracted to that kind of sound, put his hands on the keyboard only to find a melody or a chord based.

With a good reverb and with the equalizer, we get some pad sounds reminiscent of the CS80.
Or little recipe: Medium thoroughly, and Mellow Bright zero, the vibrato in high speed switched and Chorus: flashing! And yes Môsieur! Well done the wops!
Stringman but also has its own personality, that sounds a very bright and sharp (in a good way) and very gentle with his little vibrato, which also act with speed to zero, the second chorus more discreet.
It goes something weird when playing arrangements: If you press the same keys (eg Mi) on two or three octaves at the same time, there is a "bulge" of the notes that emerged from the overall volume of other notes (Comprendo?)
This is a very interesting, well operated, gives relief to chord.

But why the firm Crumar is also little recognition? Everyone swears by Moog, Arp, moogarpmoogarppp ... Damn! Italian keyboards they were too cheap, too "people" to earn their entry into the Hall of synths expensive, everyone has, and we mean everywhere?
This Stringman, like other Crumar, deserves better than the name "something Italian" as it is very well made, its has a very interesting and again, is far rarer than other machines Strings (Take my eyes. .)
See the source
Did you find this review helpful?yesno
Cookies help us improve performance, enhance user experience and deliver our services. By using our services, you agree to our use of cookies. Find out more.