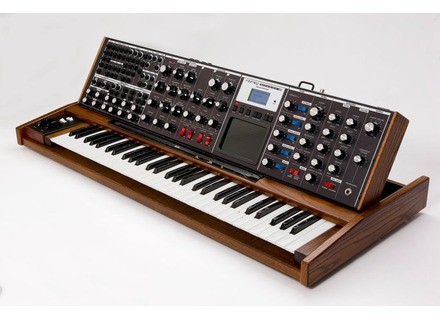 The Voyager Rack Mount Edition is the perfect companion for anyone interested in creating analog tones. I wrote a number of tracks using it as a lead, and in one case as every instrument including percussion. I also generated a variety of sound effects with it, and if you are a sound designer this is a must have tool for your arsenal . Moog is a name that is synonymous with analog synthesis, and anyone who has ever tried one in any form is bound to recognize its quality a malleability. What many may not know about the modern Moog architecture, is that the analog oscillators and filters are much the same as they've ever been, but they are regulated by finer circuitry which is further controlled through MIDI. That means that you still get the classic sound you would expect from the Moog name, but with all the advantages of a modern synthesizer.

I immediately appreciated the unique way Moog approached the design of their of this unit. Rather than being rectangular, the bottom angles up so that, when sitting on a desk, the face angles back and is easier to see and access. A couple of quick connections later and I began the journey into the infinite possibilities the Voyager XL had to offer.


I am familiar with analog subtractive synthesis, I sometimes find it frustrating to start with simple waveforms and build drastically complex patches. With the wide range of presets to tweak, this is never an issue. By the time I was finished a song that I wrote, six hours had melted away into what felt like minutes. I turned up the panel brightness, basked in the blue glow, and kept plugging away.

Like I said before if you are sound designer you have to have this, this is exactly what you need to create those wonderful leads that we all love, and the leads that this can create are starting to become relevant again in todays music!
Did you find this review helpful?yesno