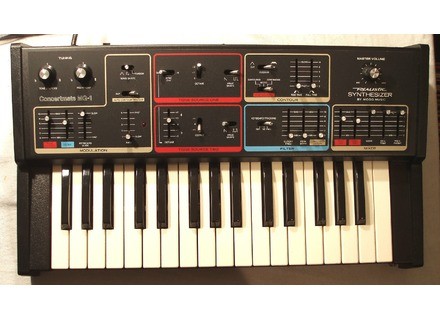 View other reviews for this product:
Everything has already been said.
Monophonic and polyphonic VCOs 2 2.5 octaves (triangular wave organ type 8-bit). (Limited but very interesting) to combine the two sections. A Ring Modulator. And noise. Unlike Snape, the VCOs are désynchronisables (choice of octave and waveform different for each). The second oscillator begins to an octave above the first. The low-pass filter 24dB/oct resonant Moog is obviously a gem and it is him the heart of the beast.

This is in my opinion one of the synths ideals to learn about subtractive synthesis. The synth is originally inscribed for the mass market (ie more or less of a toy), the terminology has been designed accordingly: we do not speak of oscillators but "Tone Sources", no Ring Modulator but "Bell Tone". Anecdotal but fun.
Everything is very simple, didactic, we understand very quickly what parameter has any effect on the sound. This quickly becomes a breeze (that's good) and very nice sculpt the sound you have in mind.

This is huge. Really. One of the best mono I had on hand. For having at the same time an MS-10 and Moog, ben is not good photo, the MG-1 Korg buries almost any point of view. Even the bass is a monster. The second oscillator obviously allows more versatility. Color level, it's gringo: it is bold, warm, copper, and incredibly musical. Typically the kind of instrument (because it is an indisputably) that looks and laughs at the beginning, at progressively use, relegating the other closet. This synth is a hidden treasure as there are few.
Just think a band like Sunn O))) has recently added a Rogue (which thus stems from the MG-1) to the live set for more grain and sub. It gives you an overview of potential cataclysmic this toy for small nChildren Ricans.
Polyphonic part is interesting for two reasons. The first is qu'utilisée in addition to one or two oscillators, one can actually simulate a real polyphony manageable by the filter and modulation. The second is simply that mono, well, it makes you a third oscillator. Coupled with the octave below the first tilt with the same waveform, it makes you a chorus that ** everything. This is obviously disproportionate as compared but hey, the Minimoog is not far (for 1/5 the price).
The only downside (and again), no modulation wheel or pitch. But the modulation section itself is well thought out and with a little dexterity, you begin to get out.

2 years that I use. I played mainly on a MS-10 before (I'm not talking about VSTs, does not exist anymore since I Moog). I'm not knocking any of the Korg, which is a great synth but hey, the Moog is over, there is no photo. With one exception: the envelopes are softer on the MG-1 thus requiring some low outspoken attack, the Korg it passes.
I plussoie previous opinion in the squabble against the neo-analos. The Little Phatty not stand comparison with the MG-1 sounds more on plastic, cold. Soft. No natural way.
What I like most: everything! I said that the sound was monstrous?
The least: their envelopes without doubt. And calibration is a bit boring. The synth is right on the beach in the middle. Lower and higher, it spin. But also it creates the natural magnifying advantageously chorus sound ...
Price / quality ratio: very good. Bought 400 euros, supposedly in good condition, I found myself with the second tilt death. Kit in Technology Transplant later he was again brand new for 70 euros more and a lot of hours repair ... So if you find one, it would probably be reckoned with this extra expense. But for 500 euros, it's still a good deal for me. It is better than almost all other monophonic currently more expensive (Rogue, MS-10, Prodigy, Liberation ...). And I'm fussy about the price ...
See the source
Did you find this review helpful?yesno
Cookies help us improve performance, enhance user experience and deliver our services. By using our services, you agree to our use of cookies. Find out more.