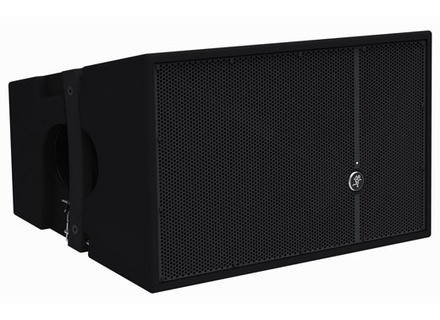 HDA, Array Speaker Cabinet from Mackie in the HD series.

The Mackie HAD is a 12 inch 2 way powered speaker that delivers 600 watts of power and has some onboard limiting. These speakers are pretty portable and easy to move around. It has 1 XLR input and dual compression drivers (1.7”). This speaker is made for live applications and not studio use, using it in the studio will not give you the sound you expect it to have because I have tried it in a studio twice and was not pleased with it. But live it has a very nice sound; it is pretty big if you keep it in a smaller venue. In a medium to larger size club it will have too much space for it to cover and it just is not powerful enough to handle it.
The total weight of it is about 60 pounds which makes it very portable, but for that much weight and at this price you would expect to get a bigger sound or more watts. That is the only downside of this speaker. Everything is great with it except the overall power which for me was probably the most important aspect.
I do recommend this speaker if you tend to only be around smaller venues. But if not; it really isn’t worth getting this because in a bigger space it will have no value to you anymore. The crossover frequency is 2Hz and the range is 57Hz to 20 kHz but there just isn’t enough power behind it.
The overall sound is clean when in a smaller space, the bass is not as expressive as I would have liked it to be but depending on which style of music you are working with it could be just fine the way it is. If your music tends to have a little more thump to it, then I do not recommend the HAD because there isn’t enough low end to give you the sound you might be looking for.