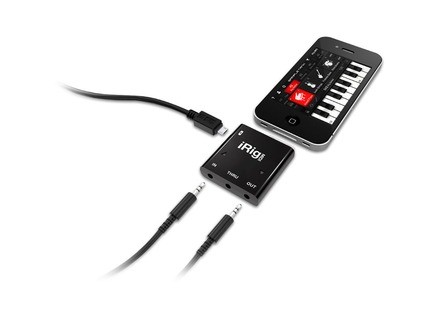 iRig MIDI, Audio or MIDI interface for tablet/iDevice from IK Multimedia in the iRig series.

IK Multimedia is now shipping iRig MIDI, a Core MIDI interface for iOS that connects a MIDI compatible device, such as a keyboard, to the iPhone, iPod touch and iPad.

iRig MIDI, together with the included SampleTank app, brings the same functions to keyboardists and producers as iRig (the iOS guitar interface adapter) with the AmpliTube app brought to guitarists and iRig Mic (the handheld iOS microphone) with the VocaLive app brought to singers.

iRig MIDI can connect a standard MIDI equipment such as keyboards, drum machines, drum pads, pedal boards and more to an iOS device to control the included SampleTank Free and various Core MIDI compatible apps, such as GarageBand, available on the iTunes App Store. With iRig MIDI, you can also use iOS apps to control external equipment such as sound modules, digital audio workstations or even lighting systems from the mobile device.

iRig MIDI sports 3 MIDI ports - IN, OUT and THRU - so you can connect multiple MIDI devices without the need of additional gear using the two included standard MIDI connector cables. Two LEDs also display the MIDI activity on the IN and OUT ports.

iRig MIDI is powered from the mobile device, but it also provides a micro USB port with included cable that connects to a standard USB power supply source so that the iOS device can stay fully powered during long playing sessions.

iRig MIDI can be used by keyboard players and producers using iOS devices for instruments, synthesizers or mini-studios. Guitar and bass players can also use iRig MIDI with multi-effects apps (including AmpliTube) to connect MIDI pedal boards for preset switching or effects control. Singers can do the same for controlling their vocal effects apps (like VocaLive). DJs can use it with drum pads and other types of MIDI devices to integrate iOS apps into their live rigs.

SampleTank for iOS is the mobile version of IK's virtual sound workstation for the studio offering 4 instrument parts with effects and an expandable sound set made of over 400 acoustic, electric and electronic instruments plus 900 rhythmic and melodic patterns. Users of iRig MIDI will get a set of 48 SampleTank sounds for free by registering.

iRig MIDI Recorder is the free utility for recording and playing back MIDI sequences or any type of MIDI data to and from any MIDI-equipped musical instrument. MIDI recordings are organized by creation date and can also be exported via Wi-Fi, E-mail and iTunes File Sharing in Standard MIDI file format.

There are now currently about a hundred apps that use the Apple Core MIDI standard on iOS and are compatible with iRig MIDI and they keep growing. For the latest list, visit www.irigmidi.com/compatibleapps.

iRig MIDI is now shipping from select IK Multimedia music and electronic retailers worldwide, as well as on the IK online store, for €54.99 (excl. tax).