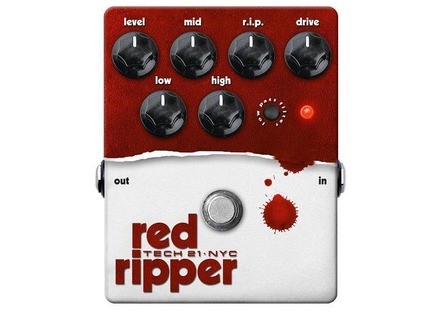 Today, I won't be gentle: kill the Care Bears, throw the wooden cross of the "Little Singers of Paris" into the fire and make place for the distortion god.

I know, you are reading a review under the Bass Guitar section, but we will talk about distortion, the typical effect of our close relatives, guitar players. However, we cannot unfairly ignore several decades of distorted bass lines. I will play the devil's advocate because I've never really played with this effect, except for my youthful last years, before I became part of the old jerks club. Nevertheless, I accepted the challenge of reviewing for you Tech 21's distortion pedal: a fuzz effect called Red Ripper.

I couldn't find much interesting information about Tech 21, except that its founder, one B. Andrew Barta, is the inventor of the "stomp-amp" concept. In 1989, he introduced a magic DI box capable of reproducing the sound of an all-tube amp (with its speaker cabinets) that could be connected directly to a mixer. This yellow and black stompbox called Sansamp became an immediate success. Ever since, the company based in New York has been manufacturing and selling different effects and offering a wide range of amplifiers ranging from combos to stacks. As forerunners in the modeling technology race, the brand develops its concepts based solely on analog circuits, leaving the digital world to competitors. A nice philosophy in our time, when simulation means almost always going though a DSP! 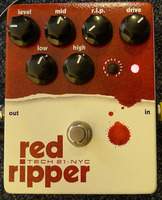 That was the corporate part. I used to write longer stories, but this time I prefer to tell you about distortion history based on unlikely but true anecdotes. Wernher Von Braun, designer of the Nazi rockets V2 who would later become the manager of the Apollo project for the USA, once said about his job: "Research is what I'm doing when I don't know what I'm doing." This sentence perfectly describes the unexpected circumstances that gave birth to this effect in music. Like penicillin, microwave, X-ray, and the Americas, distortion was accidental. Although I can't tell you who was the first musician or sound engineer that experimented with distortion with an amplifier, I can tell you something about the first distortion sounds recorded and the conditions around these particular events. It's a stirring and exciting story that you have to know if you use this screaming effect frequently without being aware of your luck!

Everything started in 1951, when Ike Turner (who hadn't met Tina yet) was recording Rocket 88, his first hit, in Sun Records studio. Ike and his band (The Kings of Rhythm) were getting ready to record when the amp of guitarist Willie Kizart was still on the roof of the car of one of the musicians. When the musician got out of the car and closed the door, the combo slipped from the roof and fell to the ground. The result: a damaged speaker. The amp was repaired with scotch tape and paper and was used for the recording, giving birth to the distortion era. Rocket 88 is also considered one of the first rock and roll songs. The mythic amp is still displayed in the recording studio.

In 1956, Johnny Burnette, rockabilly guitarist and boxer, recorded the song "The train kept a rollin" with his trio. For the recording, lead guitarist Paul Burlison used his stage amplifier, one of whose tubes was damaged, producing a clearly distorted sound that enthralled the audience. This recording, where two guitar tracks are mixed (one clean and one distorted guitar), became legendary. 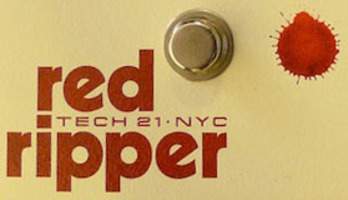 Link Wray, the power-chord inventor, also used to play live with an amp in which one of the tubes was intentionally misplaced in order to get a dirty lead sound. In 1958, he recorded the legendary "Rumble." To get a similar sound on tape as the one he had on stage, he decided to make some holes into the speakers of his amp. This guitar sound that mixes saturation and tremolo would later become a reference. Dave Davis of the Kinks also damaged the speakers of his amp with a razor blade and tacks to record the famous "You really got me" in 1964. In 1961, the damaged preamp on a mixer was responsible for the distortion of the guitar track in Marty Robbins' hit "Don’t Worry." Such distortion levels were previously unheard of. That sound, which is still considered as the first fuzz effect, won a lot of fans among other bands at the time. One of these bands, The Ventures asked a friend called Red Rhodes, a lapsteel player and electronics engineer, to find out how to reproduce this particular sound. Red created the first fuzz effect pedal. The first marketed fuzz effect pedal was the Maestro Fuzz Tone FZ-1, which became an immediate success after the Rolling Stones released "Satisfaction."

Other products quickly followed suit: the Mosrite Fuzzrite, the Fuzz face (used by Jimi Hendrix), the famous Electro Harmonix BigMuff, and the Vox Tone Bender. The latter was used by Paul McCartney in 1965 when he recorded George Harrison's "Think for Yourself " with the first-ever distorted bass guitar sound caught on tape. An idea that confirms the Lord's innovator status. Many bass players started to use distortion afterwards. I will mention just a few (musicians I like): Mel Stacker with Grand Funk Railroad, Tony Levin with King Crimson, Bootsy Collins, Les Claypool with Primus, Rex with Pantera, or Tim Commerford with Rage Against The Machine. This list could be much longer — feel free to comment this review adding your own references. In France, distorted bass sounds are best represented by Philippe Bussonet, one of the bass players in Magma, Christian Vander's legendary band.

Currently, you can find about 30 distortion pedals for bass guitar, and many bass players also use distortion stompboxes conceived for guitarists. If you are looking for a good distortion pedal or your ideal fuzz effect, I recommend you to collect lots of information before spending some hours in a store. And of course, you can start right now by reading this review!

Spin the Round Knobs...

The Tech 21 effect pedal comes in a nice metallic black box. Classy, sleek and almost useless. You can recycle the box and use it for: hiding your small secret objects, preserve grandpa's smoking pipe tobacco or build a casket for your little sister's hamster that just got squashed under aunty's big bottom. A nice box, a nice sticker, a manual, some plastic, and no battery nor power adapter.

The stompbox itself has a perfect front panel. The robust housing is made out of a thick metal sheet. The potentiometers and the footswitch seem perfectly reliable. It's a serious product made in the USA. With the added bonus of a nice decorative painting that indicates without any subtlety the bloody character of the stompbox.

On the front panel you'll find six rotary controls and two switches: output level, three-band EQ, distortion level, low-pass filter, and the buffered bypass footswitch. Last but not least, a R.I.P control allows you to modulate directly the range of harmonics affected by the distortion effect. 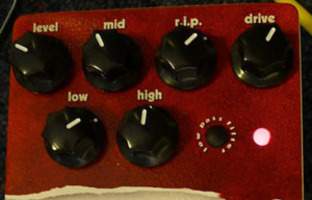 It complements the Drive control, which means that you have to adjust one according to the other. Even the slightest change to the R.I.P parameter doesn't just increment or decrement the effect, it allows you to get different modulations: set to minimum, the gain shows the standard character of a good old fuzz. Increase the setting and the distortion becomes more hollow and reminds a stunning bass synth sound. Increase the setting again to make the sound explode and enter the "kill the neighbor" mode. This control is not typical for a fuzz, so you'll need some time to get to know how to use it and to make the best out of it. This feature makes a great difference compared to competitor products because it allows you to use the Red Ripper in music styles other than metal or rock. I'm thinking of hip-hop instruments designers as well as people who like big funky music packed with Moog lines. Yes, this product is also for you!

The Red Ripper uses a trigger threshold, a bit like an envelope filter (that doesn't alter the output level): the dynamics of your playing affect the distortion and the harmonics curve directly. The harder you play with your pick, the more the sound becomes dirty with powerful highs. The more you play gently, the less the fuzz effect is audible while the frequency response stays deep. The low-pass filter allows you to suppress the high-frequencies to avoid having a too aggressive tone and damaging the ears of your audience if your speaker cabinet includes a tweeter. 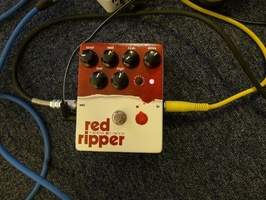 This pedal is impressive to the ear (as well as to your fingers). First thing: the circuitry isolation is effective. I powered this pedal with an external PSU and with a battery: zero noise! For the recording of the samples, the Red Ripper was connected directly into my sound card and a TC Electronic RebelHead 450 amp feeding a Torpedo VB-101. The bass I used was a Fender Jazz Bass American Special.

I didn't edit some unintended percussive notes in the bass line so that you can hear that this effect pedal requires a very controlled playing. Especially when it comes to left-hand playing. You cannot make mistakes with such distortions — every imperfection is amplified like the rest of the signal. The manufacturer suggests to dampen the strings with your right hand's palm. A tip to be taken seriously to get a more precise playing. The first recording reveals the sound in bypass mode. For the second sound sample, the EQ setting was flat with R.I.P @ 0 and Drive @ 2/3 to produce a classic fuzz sound.

For the third sample I boosted the low frequencies and attenuated the mids while increasing the R.I.P setting to the same level as the Drive control (2/3). The fourth sample is almost the same but the R.I.P is turned fully right. From the very first notes, you'll hear the difference in the attack and the additional harmonics in the high-frequency range. The two last samples use similar settings: Drive turned fully right, mids and lows @ 2/3 and R.I.P @ 1/3. However, I used the low-pass filter on the first sample and not on the second one. This samples ought to give you a broad idea of how the Red Ripper sounds. Even if it is possible to find better sounding settings and get a much wider sound range.

As I wrote in the beginning: I never play with distortion. However, I used to be shop assistant in a music store, so I listened to tons of distortion pedals in every category and price class. Thus, I can assert that this blood-red stompbox proposes a well thought-out concept nicely implemented. It is conceived for a wide range of users, not only for rockers playing with a pick. Considering the market and the price of the Red Ripper ($190, street price), the latter would be placed in the middle class, since you can find fuzz effect pedals from $40 to $380. Regarding quality, I would personally place the Red Ripper in the higher end. I suggest you to try out the product yourself and, if you decide to make a pact with the devil, don't forget to use a cap, otherwise your hair will be blown away.