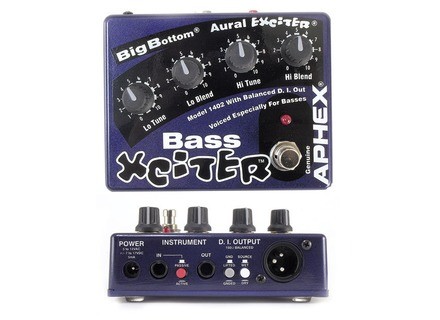 Playing at low volume in a church setting, I wanted something to give some added depth to my bass without having to turn up the volume. Paid $149 from Musiciansfriend.

The Exciter did what it advertised -- it added some depth and 'life' to the bass sound so that it appeared to be louder onstage without actually raising volume. It was easy to use also.

It died after being used once a week for about a month. Aphex replaced the unit, but I was not happy that it dies so quickly with moderate, careful use.

Built very well of heavy aluminum. However, as noted above, it dies after being used very little, so I doubt the quality or reliability of the internal components.

The Aphex Bass Exciter does what it promises, which is to add life and depth to your bass at low volume. However, the unit died after being used for about eight hours. Although Aphex replaced it for free, I thought it should not have had problems so quickly after being used gently for such a short time.