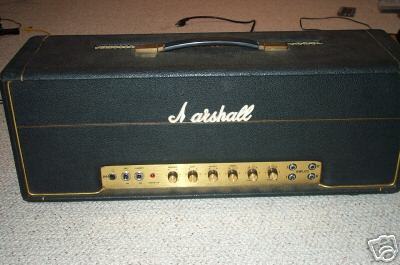 View other reviews for this product:
apryvan
Publié le 02/16/06 à 22:59
It's a head amplifier lights, 4 power (EL34) and 3 pre-amp (12AX7). The lamps are the same as the SLP and 1959 MODELS superlead. The MODEL is manufactured from 1966 t in 1980. In 1976, Has reviewed and Aesthetics in 1980, his place in cda JCM 800 Bass Series. The power is 100 Watts, but then a real amp 100W lamps. Connections are between the two spars and channels for each channel, a Hi and Low .... sincrement but there is no real diffrence between a 4 in contrast to superlead possde channel Hi Treble and Normal, the Superbass has two identical channels Normal, Volume 1 and Volume 2. output, 2 speaker outputs jack 1 / 4. There are no effects, no effects loop for non-plus, Presence, Bass, Middle, Treble, Volume 1 and Volume 2. that's it ... Oh yes, there is a slecteur impdence the rear of which he must be careful not to lose it. It is a prvu amp for bass guitar, but is used by most of the time guitarist. Especially since technology evolves with the latest issue amp transistors.

The configuration is very simple (see Previous). The sound ..... oh yes .... .... Marshall Is that clear enough? For a bass guitar, the amp is plutt''mid-level''but prsence is standard and the awesome power ... with a volume the sound is best dj, Volume 2, all tremble around you, to a large room we think 5 ... cel but takes trs performance loudspeakers. For the guitar is essentially a Superlead or an SLP 1959, but the channel Hi-treble .... Marshall was the sound, but with a little more crunch, but a little less possibility of adjustment ... but a power curve that rises more slowly.
For the manual .... I forget possde A model 1973 bought secondhand in 1986 ... I guess he's getting lost between 1973 and 1986 (smiles).

I have in my possession since 1986, but I have not used the 1998 in 2004. I had some problem during the PERIOD the electronic or not less than five technicians passs above .. To find one that ultimately matter to me ... it went up nine amplifiers that must be handled with care (in fact it is trs heavy with 2 large transformers) do not place it on a case of sound that vibrates a lot (no prob with guitars a.). Submitted little I use, but I have in my possession a pice collection found less and less today (hh spices also!) .. . The things I dplore are important weight, its fragilitainsi that the scarcity of technicians able to do the service .. most are: its presence and power standard, its looks, its rarity (collection). For the guitar ... this amp is Whereas if you like the sound Marshall typical ... for low, it is better today.
00