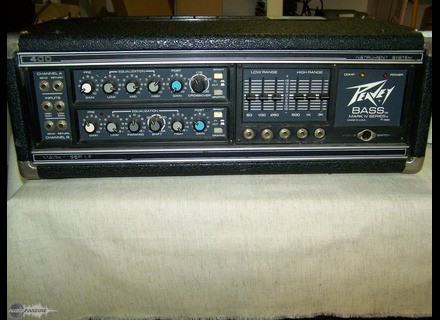 Im a multi-instrumentalist, I play bass, guitar, drums and some piano. I've been in many bands, playing many different genres of music. And i've also done a fair bit of producing

I bought this head used for $250 Canadian. At Colossimos music in Thunder Bay Ontario. What a steal! This is such a great head.

I love this bass head. the 300 Watts is WAY more than i need (actually im SURE that this thing is way louder than 300 watts but that's what the back of the head says. I think it may be 300 per side though.) This thing is LOUD. I have a cab with a limiter on the back. I showed up at a large venue gig with my cab limiter on 5 (out of 10) and my volume at around 4. The sound man told me to turn it down. And like i said. It was a big venue.

The tone shaping is beautiful. I can get ANY sound i want out of this thing. Crazy lows, Beautiful slap, anything...and i can still cut through any level of distortion my guitarists are using. Every not is perfectly clear. To quote Line 6..."it has a tighter bottom end than your best friend's sister".

It's a bit heavy, but not bad... actually the ONLY thing i wish this unit has that it doesnt is a DI (Direct input. Either XLR or 1/4 inch i dont care. but it would be a nice feature)

SOLID! I bought this head last year... It's older than i am. (It's 24 years old) and i haven't babied it. The thing is a tank. I'm not worried about it at all. And even if for some reason, something went wrong with it, and i only got another year out of the thing, id still say it was worth it. For the price i paid i've gotten TONS of use out of it. I've had people at gigs ask if they could use it instead of their heads. In my opinion this is the most solid bass head Peavey has EVER made.

I was originally going to purchase an Ashdown ABM series. (i was willing to spend REAL cash) and a friend reccommended i go down to the store and try this out. It had BETTER tone, More Power and it felt way more solid. The best part is i saved like $1500. I'll reccommend this head to anyone looking for something serious.