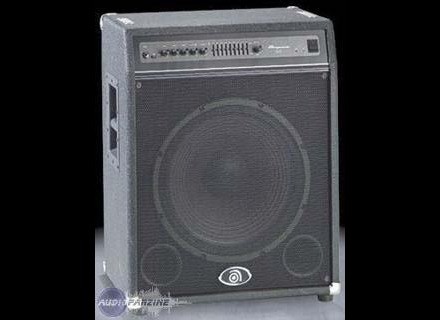 View other reviews for this product:
Prampli amp and transistors, power of 100 watts, hp 15 inches.
switch between instrument with active / passif.line out, XLR DI output and footswitch between
to trigger the 9-band equalizer.
adjustable bass, midrange, treble, Drive setting to simulate lamps prampli,
of gain and output volume push / pull to turn on the legalization 9 bands.
no effect (good).

Trs simple rules, all rglages flat, the sound is deep and brilliant, ampeg what.
is easily obtained all the sounds you want, the drive can be very useful for dirty sound
remains despite the trsdfinit hp 15 inch.
is certainly one of the best combos I had 150 watts between mains.j have had the chance to use it on scne before buying and to play with a drummer
a guitarist, a keyboard and a singer in a group of blues / rock style popa chubby twice a week (one year) in an Irish pub. (without transplanting in the PA)
LJE and I quickly realized that he would like the road!
bought used I did not have notice of what I have not seen lack the simplicity of use.

This amp suits all styles of musique.super versatile.
I used a Fender Jazz Bass Geddy Lee, a standard jazz bass us a noguera
merger, musicman sterling.tout trs sounds good and grain of the instruments is respect.
we can get the sound you DSIR and refined with the 9-band equalization (which can be
set off via a footswitch, niquel to pass over during the chorus).
personal little trick: if you push the drive back and decreases the saturation approaches a
saturation lampe.trs convenient for its remains sounds vintages.le Defines even a few meters. (very important for small scnes or sound is not welcome)
TRS is a good amp to play in groups if you want a sound worthy of the name without breaking
tirelire.il its no longer manufactured but is still in any case it is occase.en
much better than the new MODELS BA112/BA115.un of the best value qualitprix
in its class.

I've used for 6 years in RPET and scne.il has never shown any signs of faiblesse.avant this amp, I had a TRACE ELLIOT 715 and there is photo.j not love it particulirement report his / power / prix.je have sold because
I wanted an amp smaller and less lourd.seul the Galien Krueger MB 150 S convinced me.
otherwise I think I keep my ampeg B3.j have tried it much more expensive amps that
forcment not doing more! or even less! there are better, but still a matter of taste and budget. (and transport!)
If you are looking for an amp that sounds, not too expensive, portable and a ampeg b3 Submitted opportunity to you, try it!
Today, if I had to change the amp, I think my choice would go to Eden or ASHDOWN
SERIES ABM.faudras break the pig, but hey!
See the source
Did you find this review helpful?yesno
Cookies help us improve performance, enhance user experience and deliver our services. By using our services, you agree to our use of cookies. Find out more.