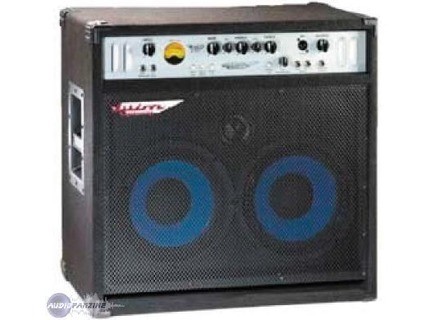 View other reviews for this product:
I bought this amplifier from Southampton in the UK. I went through ande tried as many head and speaker options, and this sounded the best for the price i paid. I paid £3oo for it and have no regrets.

It has such a great sound, even when you are not using the eq. When using the eq, there are five control knobs, tweaking each one makes it really easy to get any sound that you want.
I really like the sub-harmonics. At the puh of a button you can get an octave below. You can also control the volume of the sub-harmonics.
It also has a post eq xlr, which is great for recording. There is no need for a di box and the recorded sound you get is so good.

I had a few problems with this amp. After a couple of months of practice and gigging, the amp would cut out after it had been left on for a couple of hours. I eventually found out that the heat capacitor had fused. I got this fixed and it was fine for a while but the same thing happened again. I sent the amp off again and they installed a fan at the back. I have not had any problems since. (that was two years ago) The customer service was excellent.
It would be nice to see a pedal to change the sub-harmonics off and on.

This thing is built like a tank, made out of an aluminium alloy. There isn't much i can say, since they put in the fan at the back there have been no problems, this means construction and quality are fairly good.
I think the problem with not having a fan on the back is that the metal does not dissipate heat quick enough, which meant that the heat capacitor fused.