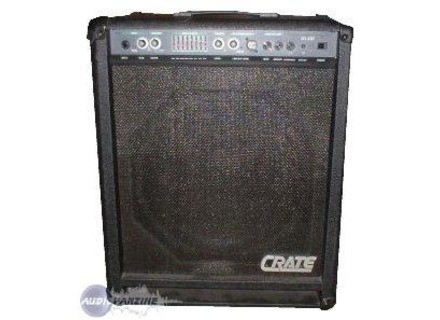 View other reviews for this product:
This is a solid state bass amp made by Crate. Their products tend to be hit or miss, but more often than not their higher end stuff (which is still cheap compared to most gear) is pretty decent. This falls into that category. It's a combo amp, and has a few interesting features. The front panel has a 1/4" input jack, a gain knob as well as a contour knob (and a switch for active pickups), plus an impressive 7-band EQ. The back panel has a line out jack, headphones jack, external speaker jack and an effects loop. The amp is 100 watts as the name implies. There aren't any effects.

Getting a good sound out of this is actually pretty easy assuming you want to get a few different types of sounds. None of the sounds you get are going to be spectacular (at least not to a trained ear), but it is really good for getting a lot of different types of sounds, which can't be said for every bass amp. The 7-band EQ is what really helps in this department, as there's so much variety to be had, you can get really specific and dial in more or less just what you need. It helps the amps natural tone, which, to be honest, could be better. This amp is heavy and slightly awkward, so it loses points for that, though.

For the price tag attached to this thing, I was pretty amazed at how good it sounded. It's got a great variety of tones that are hard to beat thanks to the in-depth 7-band EQ. I've used it with a jazz bass as well as a P-bass (two great but different sounding basses), and I have to say it didn't necessarily favor one over the other. Taking the time to try out different combinations gave me a great variety of tones. I got a semi-distorted, rocking tone. I got a warm, fat Beatles-sounding tone, and also a great smooth fusion type sound. There were many different sounds I could achieve between those. So while none of them were perfect (though the smoother ones were close), I feel that this amp has a lot of value. It also loses points for hum and noise (which is occasionally an unsolvable problem).

For an amp at this price, it's a great find. If this is about as much as you can afford, then you probably won't be able to afford an amp that'll give you a perfect tone (unless you get really lucky or have a warped idea of what a perfect tone is). So this amp will work well for you as it'll sound good in a lot of different contexts. If, on the other hand, you have an amp that does one or two sounds really well, this will be a good thing to have on the off-chance that the other amp breaks, or you find yourself playing music that doesn't really work with your main amp. This is essentially a good piece of gear.
Did you find this review helpful?yesno
Cookies help us improve performance, enhance user experience and deliver our services. By using our services, you agree to our use of cookies. Find out more.