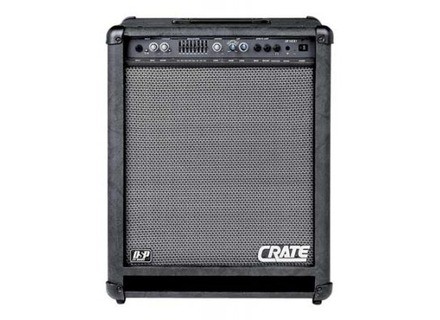 View other reviews for this product:
The Crate BFX100 is a 100 watt bass combo amplifier with a 15 inch speaker and built in, on board effects. There is an 8 band equalizer, a speaker out, a headphone out, and selectable effects which can not be combined. However, since fewer effects are generally used on bass, as a pose to how they are used on a guitar, there is little need to combine the effects. It would be nice if there were a direct out of the amplifier that wasn't a speaker output.

This amplifier can provide a nice bottom end, yet at the same time can cut through both guitars and drums. It is powerful enough to hold its own against a couple of half-stacks, and if it were miked it'll certainly hold up against more. It doesn't have the same quality as a higher end amp, and it is a bit heavy since both the cabinet and amplifier are combined, but it is a good amp if somebody is dead set on a combo amp.

The tone out of this amp is pretty good, but with the wrong EQ settings it will get muddy fast. Depending on the volume, the EQ will need to be adjusted. This is more apparent on a bass amp over a guitar amp due to the difference in producing the lower frequencies of sound. The effects are both useful and fun.

This amp replaced a Fender Bassman 25, which just wasn't loud enough for me to play with a rock 'n' roll band, even if the tone was better than this amp's tone. For the money, and if the player can live without onboard effects, I'd pick up an SWR head amplifier and use a separate cabinet. That way, the player can use different or multiple cabinets depending on his or her needs, out of a better sounding amp with better output features (minus the effects). The effects are nice on this amp, but a pain to implement because it would require dialing them up each and every time, and not easily switchable across songs as a lot of modern effects equipment is. Still, if this amp could be picked up used for each and still sounds good, I'd snatch it up if I were in need of something like this.
Did you find this review helpful?yesno