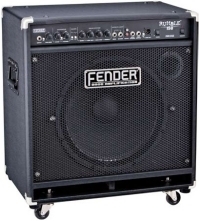 I got a bit nostalgic when I wrote this review. I was 16 when my first amp was waiting for me under the Christmas tree. Not a 15-watt amp but a big one. To play in a band, do live gigs and be cheered by a wild crowd. In short, I could stop playing by myself in my room. The amp was almost more bulky than the Christmas tree: it was a second-hand Fender BXR 300, a huge combo with casters. I played my first live gig with it — this 15" amp brings back lots of memories.

Sixteen years later, I’m reviewing the Rumble 150. This descendant of the BXR is conceived for bass players looking for a first amp to play in a band — like I did at that time. Let me wipe a tear… And now, let’s get on with the review!

64 lbs, impressing size (13.4" × 22.8" × 23.6") and 150 effective watts. A big 15" woofer, a tweeter for high frequencies (it was missing on my BXR) and enough volume to provide a big and deep sound. The manufacturer kept the front port for the bass-reflex (it’s the third generation), and removed the bright LEDs and the carpet covering. The latter is replaced with a black textured vinyl covering. Carpet or vinyl? It’s all a matter of taste. Personally, I don’t like to dust nor vacuum clean. On the other side, Tolex is easily marked. It’s an aesthetic or practical choice.

The front side is sleek and simple, which is a good thing: just a black protection grill and a black panel with white silkscreen. As for controls and connections, everything is on the front panel. Nothing on the rear panel except the power connector. The connections are quite comprehensive: instrument input (with active/passive switch), effect loop, RCA aux input (for connection to a PC, MP3 player…), phones output, footswitch connector (for overdrive control), and XLR line output. 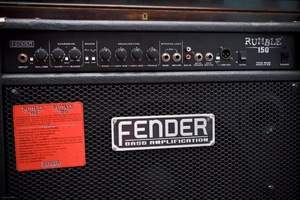 As mentioned in the headline, the Rumble 150 is equipped with four rugged casters. It also has two recessed side handles with springs, which are a bit too thin for my taste. However, they do their job. I love casters! What would be of our backs it it weren’t for them? Considering the price, it’s not surprising that the amp and preamp stages use solid-state technology. A big fan on the rear panel ensures cooling, and it also makes a bit of noise. This noise is not deafening but it is clearly audible when you aren’t playing.

So, what’s new? To make it short, the Rumble 150 has more output power than its predecessor. Indeed, the whole product range got more watts, except for the Rumble 15. I guess nobody is going to complain for getting 50 watts more, plus overdrive. The manufacturer doesn’t offer the 2×10" alternative, which is a good choice considering that users of this amp want to play loud and heavy rather than gently.

The product is made in China. The overall manufacturing and finish quality is good. Ok, now let’s plug a bass guitar! For this review, I used my American PB deluxe 5, a Boss RC-20 (my faithful sampler on stage) and a Zoom H2.

As well as a pair of cables — never forget the essentials! 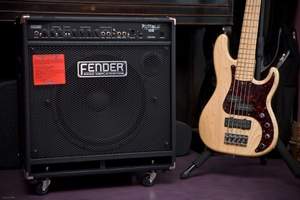 As already mentioned, I tried out the amp with my five-string bass. I played a lot of different settings in order to show the full sound range of the Rumble. Let’s talk about output power first: in which situations will you use with this amp? As we said before, the sound is big and deep. The generous size of the speaker cabinet is one of the reasons for that. As well as the front port, which is as wide as the cabinet itself.

Personally, I think the actual power really corresponds to the manufacturer’s rating, even though I didn’t have the chance to play the amp with a drummer. The woofer’s response stays consistent at loud volumes: I shook the walls turning the knob three quarters up and it performed quite good. On the other hand, the 2" tweeter doesn’t like loud volumes because it starts to distort with some notes. It’s a pity somehow, even if the problem isn’t likely to arise with every bass guitar. As a consequence, I ask myself what is the lifetime of the tweeter. I guess it is more reasonable to turn it off when you play at high volumes. Its on/off switch is therefore useful.

The output power of the Rumble is enough for rehearsals, small live gigs (pubs, clubs) and even mid-size theaters (using the XLR line out). Thus, the amp will be perfect for your first live performances. However, it also depends on the gear used by the other band members and the number of musicians in the band.

Let’s try it out!

With linear settings (flat EQ, no shape filter), the response has no special character. You get a rather neutral, standard sound. I could easily recognize the sound of my dual Jazz Bass pickup. The tweeter adds brilliance and precision to the sound and it gives a modern touch to the rather ordinary sound. Below, you’ll find two sound samples with linear settings, the first one with tweeter, the second one without tweeter.

For the next sound samples I will always leave the tweeter on. You’ll notice it by its subtle characteristic presence. Both shape switches are effective. They give you either a bass boost (“Punch”) or a hollow response (“Scoop”). Using both at the same time makes no sense. They allow fast sound corrections to either emphasize the fundamental or let a slap part cut through better. In short, they are useful but somewhat difficult to use during a song because they are only accessible via the front panel, but not via the footswitch (sold separately).

Now, let’s try out the EQ with five different settings. In the following sound samples, I turned the shape switches off and only used the four-band EQ. First of all, the bass line with flat EQ.

Same thing but pushing up the high mids instead of the low mids. Note how the sound becomes hollow and totally different from the previous sound sample, even though we only inverted the mid bands.

Now, low and high bands are three quarters of the way while both mid bands are one third up. My goal is to get a more dynamic response. This setting produces a more percussive sound.

Finally, a sound sample with a bit of everything: bass, low mids and high mids one third of the way. Treble just pass the zero mark.

Here, you’ll hear two slap samples, the first one using the scoop filter and then with the same EQ settings as in sample 8. Note how the scoop switch cuts the mid frequencies, which is, I think, a bit regrettable in terms of dynamic response. It’s often interesting to keep some mid frequencies when you hit hard with your thumb.  But the amp offers both possibilities (either with the shape filter or the EQ).

Last but not least, distortion fans, power trio members and other fat-sound freaks will most surely like to listen to the overdrive section.  The bass part is always the same but I progressively increase the overdrive settings. (clean, half clean, two thirds distortion and, finally, three quarters distortion). For this example, I increased both controls (Gain and Blend) proportionally.

My impression at the end of the review is that the combo provides a wide sound range, in spite of its rather sophisticated sound character. The sound samples show that the user can shape the sound easily to find the tone he wants. A very good point if this is your first amp. If you are a beginner, you probably don’t really know what kind of music you’ll end up playing.

It’s always important to stay open and have the possibility to become an all-round bass player and have fun with any music genre. Considering its price, the Rumble 150 is an interesting product for musicians who start playing in a band and want enough output power for that. The quality and value for money are good. Give it a try and compare it with competitor products.