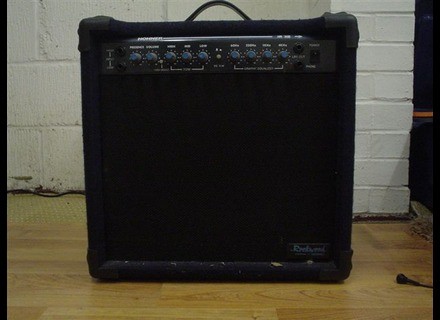 Value For Money : Excellent Audience: Anyone
This amp is very little known but Hohner makes really good products, especially as this one was made before planned obsolescence so it’s high-quality stuff.

12" speaker
Two instrument inputs : active or passive bass
Presence control (changes mids and highs, very practical to change the sound quickly)
Volume control, up to 40W power
High Boost switch, which can be activated with a standard footswitch standard, either for a solo or a change within the same song, I never trie dit (I don’t own a footswitch)
3-ban passive EQ: low/mid/high, classic, for a basic tone shape
BUT!
It also features an active, switchable 4-band EQ, allowing to really carve one’s sound, whichever bass you use. It’s really a great feature on an amp in this price range – and also this model’s main asset
Headphone and line out
FX loop – unfortunately i have no idea as to its quality as i don’t own a bass pedal…
Classic supply plug


This amp has accompanied me for the last 5 years. It really allows going after the sound you’re seeking and you can adapt to all kinds of music, i even used it with a guitar to play jazz and it sounded great.
It’s sturdy, a bit heavy but nothing to compare with a full-tube amp in the same power range.
The 12” speaker goes low enough, and even if it can’t go under 100Hz when you raise the volume it’s well enough if you don’t play on big stages. It works fine in rehearsal, even with a drummer.
It’s great in theory, but mine is starting to age and get tired… it starts hissing, plocs at turning on and off, gets overdriven when you take the volume beyond 8, but after replacing a few condos I guess it will be alright.
Did you find this review helpful?yesno
Cookies help us improve performance, enhance user experience and deliver our services. By using our services, you agree to our use of cookies. Find out more.