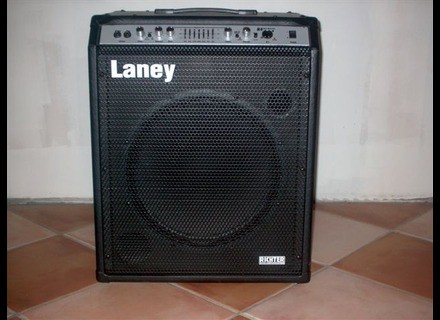 It's a transistor amp dlivre power of 300W.
Rglages level, there is a potentiomtre for bass and treble. The mdiums are adjustable by a qualizer.
There CONTRL for gain and volume and three push buttons (Comp., limit defeat and Horn).
I do not know exactly what all the buttons but it's good trs easy to use.
The loudspeaker is a 15 per

I play without a rock band, punk rock, and this style of music, I think it's a good amp trs.
Pouissance level, when playing in a band is gnial there not that make the head: I do not think Exceeds once the level of volume 4 rp tribution.
Reduces the manual is shrinking, a simple A4 sheet intgralement English.

I play without a rock band, punk rock, and this style of music, I think it's a good amp trs.
It happens to have sound greasy or otherwise rounder according rglages. Anyway, even if I am not a fan of this technique, I do not think this is the amp for a rv slappeur crazy.

I use it for over a year.
What I like least is the weight of the amp must avoisinn the 30 kilos.
I bought 380 of a German website, while a vendor was selling 700 Saint Etienne. Before buying it, I tried several amps Hartke but I find them too mtalliques sound. I also tried a Fender in the same price range (380).
APRS So I tried a 400W Bass Amp Mark and I confess that Laney was defeated but that's not quite the same rate.
At this rate the amp of this power with sounds that are perfectly suited my style of music: there's no saying I would do exactly the same choice, despite the weight.
See the source
Did you find this review helpful?yesno
Cookies help us improve performance, enhance user experience and deliver our services. By using our services, you agree to our use of cookies. Find out more.