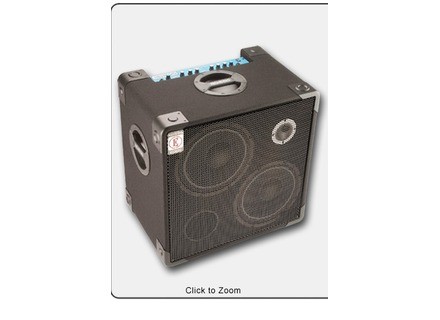 Contruction solid but light enough (26kg), 4 castors, handles on the sides and top.

The manual is quite succinct, but said the main thing.
To adjust, as usual, we seek the sweet spot (just before the gain saturation) by adjusting the gain and then mounts the volume.

What is nice is that you hear exactly what is sent.
This amp makes accurately reflect the sound of the bass and also the bass player of the game.
We&#39;ll have to play precise! Attacks stifled, the slap, playing with a pick or thumb: everything is faithfully transcribed (including the bread!).
The Nemesis is originally designed with the same philosophy as the EDEN: neutrality and respect for the source.

We&#39;re starting to play with the pots and there is the walk total!
First, the compression is very good, although it keeps the attack and is almost forgotten as it is natural.
Enhance the setting provides a good big sound, reminiscent more amps rock.

The equalization is perfect, it is accurate and musical.
My favorite is the addition of semi-parametric: it is easily adjusted and you get sound with a strong personality. Beautiful!

A word about 12p, which more than a compromise, add up the accuracy of 10p and the "growl" of 15p. For a preamp so versatile, it&#39;s a very clever combination from EDEN.

I play mainly blues / rock with my band.
Our repertoire is broad and ranges from jazzy pieces to pieces very 60&#39;s rock through modern blues.
I like to change radically between the two pieces and I&#39;m not disappointed.
My influences are looking for bass players at Stax / Motown: Thurs accurate, well written, but not rock. I play mainly finger, little slap, little pick.

I own this amp for 2 days (that much).
I tested it with my bass, an active Mayones BE5 (Bartolini electronics): its a very versatile (and not easy to solve). I found a huge range of sounds. No doubt, the combination of the bass and this amp is very interesting.
I also have a modified JB Mexico (Di Marzio UltraJazz), I have not tested.

After a good break, I think it will sound even better.
I tested soon in rehearsal and in concert, I would come sharpen my opinion.

I tried other models (stt Ampeg), but not comparable because there are very few amps 2x12 (a Fender model, I think).
I like the Fender sound, a little less Ampeg sound (it&#39;s a matter of taste).
I was looking for an amp that can adapt to any style, it&#39;s done!

I paid this amp € 1050 in Bass Center (Pigalle). It is not given (850 € from Musik Produktiv) but this amp is a little Arlesienne (like waiting 6 months).
There he was available now, so I jumped on it (too bad for the price).

Most:
- The neutrality of the sound (it can be a - for some)
- Build quality (wood, handles, wheels, switches and pots)
- Possilités the output (line, XLR pre-EQ, post-EQ)
- The semi-parametric breathtaking opportunities
- The fact of not sounding like everyone else (!)

For those who want to pay EDEN mind without the need for a monstrous power and attempt the adventure of 2x12, it&#39;s heaven (pun intended).
See the source
Did you find this review helpful?yesno