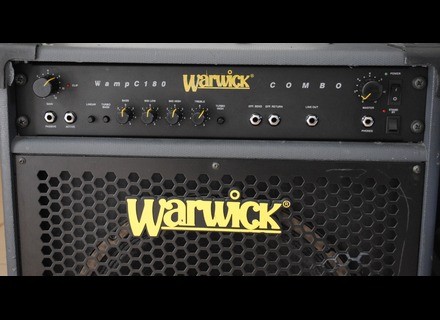 It's a transistor amp
Dlivre power is 150 W / 4ohm (note the SPECIFICATIONS)
Dlivre power is 180 W / 4ohm (note the part Amplification)
between Jack Bass and another passive Jack Bass Active
A gain of rglage with LED Clip (info gain too powerful)
Rglage Bass, Mid Low, High Low, Treeble
Linar button (allows rduire breath - perfect for work at home in a quiet, soon to hear the breath gnre an amp)
Turbo Bass button and turbo button High (self-explanatory)
An effects loop (between Jack and Jack exit). Line Out jack and headphone jack.
ON / OFF button and Standby faade
For the rear part: 2 female jack outputs to connect the HP and if you DSIR an HP supplmentaire (4 ohm min)
Powered by 230V 3-pin computer type.
The fuse is not easily accessible, you must disassemble the amp. Rest assured in 9 years I have never had to change it!
The HP is 15 inches, with a bass reflex type wind. It is well made. He is being protected by a grid trsrsistante.
There are 2 cents on the grips to move the amp is quite heavy.
Will have one bassist proverb that says "if you want the sound, the cabinet doors!"
The finish of the amp is good trs!

The configuration is very simple. The corrections are top (not a lot of buttons but the main one is l. ..).
I did not have the manual, but frankly, there's no need!

The grave is very well made and when you press the TURBO BASS, a well boosts the bass. For the treble is a little less pronounced (may be missing a tweeter found on other models).
I play with a Fender Jazz bass and mxique sounds too good!
Power is more than enough to play in a group of hitters!

Notice of a bass magazine (September / October 1997): A powerful amplifier, prcis, equipped with effective corrections trs, with great bass and excellent return of so serious. In addition to its simple beauty, this amp has the good fortune to be fitted with grips latrales.

That says it all!

I bought this amp used in 1997 (he was 5 days).
I love everything about this amp, especially his sober style with some touches of yellow color.
The report qualitprix silent correct (in about 6200 Francs 97)
I also possde TORQUE T100BX a combo, it's clear that it is less good, but side two times less!

If I buy an amp, I do not know! mine for me so that I do not want to change against another!
See the source
Did you find this review helpful?yesno
Cookies help us improve performance, enhance user experience and deliver our services. By using our services, you agree to our use of cookies. Find out more.