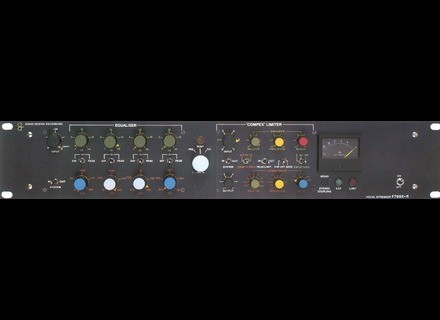 View other reviews for this product:
The ADR (Audio & Design Recording) Vocal Stressor F769X-R is a British channel strip from the 1970's. It's made up of an equalizer and compressor and is one of the first of it's kind in that respect. It's an analog piece of gear, the connections of which I don't know since when I've used it it has been hooked into a patch bay for easy connecting. It will be rackable and will take up two spaces in a traditional casing.

The configuration of the ADR Vocal Stressor F769X-R isn't difficult to follow if you're familiar with the general make up of channel strips, compressors, and equalizers. If you're new to the game I'd recommend doing some general research on what everything will do, but otherwise you should be able to figure it out pretty easily. The equalizer has four bands with a gain knob and a frequency knob to go along with each as well that has about four or five fixed frequencies to choose from on each. There's also a switch for peak, 0, or dip settings. The compressor is a bit more complex as it has separate sections for the compressor and for an expander, as well as a variety of other controls. A manual might be helpful if you're new to signal processing, but chances are that if you're new to signal processing you won't be using this.

I love the sound of the ADR Vocal Stressor F769X-R, as I think it's a great signal processor across the board. The equalizer is super fine as I find it to be quite flexible even if it's not fully parametric. It sounds outstanding as it's incredibly clean. The dynamic processing section has a lot to offer and there is really a lot that can be done with it. The box as a whole sounds great for more than just vocals even though that's what in the name, as it's awesome for drums as well. It's very flexible and in my opinion will pretty much work well across the board...

The ADR Vocal Stressor F769X-R is a pretty rare piece of gear, and I believe that you'll find it under a few different names if I'm not mistaken. This is definitely the classic British channel strip, as it's got the make up and look to match as well. It's like a Helios sort of channel strip outside of the console of course, which is really great to have in any situation. It's not going to be easy to find one of these, and they will certainly cost a lot of if you can get one. Having said this, if you get the chance to use one of these in a studio as I did, the bottom line is that it's an awesome chain for recording vocals and beyond.
Did you find this review helpful?yesno