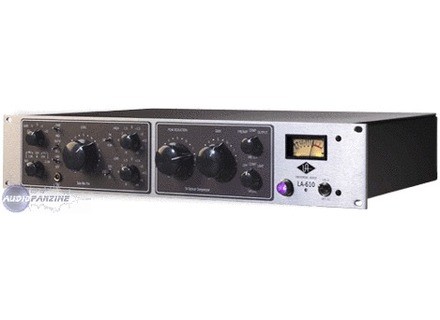 LA-610, Channel Strip from Universal Audio in the LA-610 series.

View other reviews for this product:
The Universal Audio LA-610 is one of the best channel strip processors on the market. But beware, its pricey so you will be paying for a great piece of equipment. Not really anything negative to say about this piece of software. I have used it several times over the last few years and never had any issues with it. The LA 610’s preamp will really warm your songs up, it adds great depth to your music with out any effort. The way it brings your music together with the warm is a quality that I havent been able to find in any other channel strip on the market. Though there are probably some that are just as good, but cost even more than this on.

The Universal Audio LA 610 is based off of technology that was developed back in like the 60’s or the 70’s. There have been a lot of major songs recorded with this piece of gear and it is still being used in many major studio’s around the globe. I really don’t see the need to have something this powerful in your home set up. Unless you do all of your work out of home and want the best quality you can get.

Sounds great, we ran almost anything you can think of through this thing and it did the job over and over again without any issues. Its pretty easy to set up as well, just a few knobs and you really wont need a manual unless you want to read one. The knobs are self explanatory like “peak reduction” “Gain” . You can pretty much just go with it and get a good sound.

Overall, the LA 610 is worth every single penny if you can afford it. If you look around online you can get it in a package with a mic too. That’s probably the best deal instead of just paying that much just for the channel strip itself you mine as well get a mic too. The Universal Audio LA 610 is great and versatile. You will have no complaints with it. Save up and purchase it for the studio!