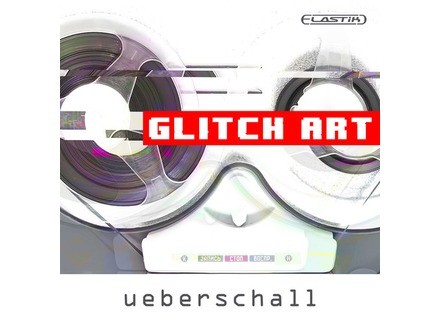 According to Ueberschall, Glitch Art's 10 construction kits bring together elements of classic glitch sounds, IDM, electronica, dubstep and urban along with a commercial pop sensibility. Created by Bucharest-based producer Yvat, the musician behind the experimental Art of Sounds Elastik library, Glitch Art contains approximately 500 loops plus numerous individual samples, for a total nearing 2GB of samples.

Instrumentation includes drums, bass synths, both melodic and pad synth parts, plus the usual sound effects inherent to the "glitch vibe". Both pre-mixed drum loops and separate loops for individual kit elements such as kick, snare and hi-hat are provided, allowing users to craft their own drum mix or to construct a breakdown. The included stereo drum loops provide both a rhythmic bed and plenty of glitch-style beat manipulation. Some of the constructions kits also include vocal parts recorded by singer Oana Brutaru.

While the mood is definitely electronic, and the rhythms cut up to within an inch of their life, a melodic and harmonic sensibility is also present, whether for an underground electronica style or just to add a quirky musical vibe to a music-to-picture project.
Also, using the Elastik player, all loops in Glitch Art can be customized with a few clicks so as to adapt to any existing projects in speed and pitch, and the browser manages all installed Elastik libraries together all the available loops are in instant access - meaning that not only loops of  one, but all installed Elastik libraries can be combined with each other.

Featuring a total of 1.8 GB of content, 10 Construction Kits and 496 Loops and Single Samples, Ueberschall's Glitch Art is available for €49.00. More details are available at Ueberschall's website.