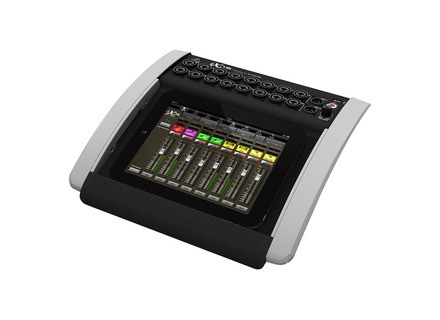 Mackie has now a competitor on the digital iPad mixer market, with Behringer introducing at NAMM 2013 the new iX16 digital mixer for iPad.

Designed around a form factor suited for home or on stage mix position, the Behringer iX16 features 16 digitally-programmable MIDAS-designed mic pres, all controllable remotely from the supplied iPad app and a 40-Bit floating-point DSP. Control options include PC/Mac/Linux over Ethernet or Wi-Fi as well as iPhone/iPod Touch for personal monitor mixing right out the box.

Behringer has included the ULTRANET digital audio network technology for direct connection of the iX16 into a network with X32 Digital Mixers or the company’s new iQ Networked Active Loudspeaker line, for 16-channel connectivity over a single CAT5 cable. The same system allows for connection of the P16 Personal Monitor system, allowing for up to 64 monitor mixes. A USB 2.0 interface turns the iX16 into an 18 x 18 channel audio interface.

The iX16 also includes MIDI In/Out for remote scene recall or controlling other MIDI equipment. Presets can be saved internally and backed onto a USB drive through the type-A connector that also serves as a stereo recorder directly to flash.