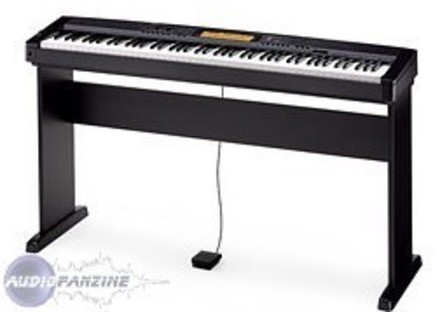 CDP-200R, Digital Piano from Casio in the Compact series.

«  Very good for beginners and more »

View other reviews for this product:
7 Octaves (we just go virtually shifting up to 9 notes via a function but the manipulation takes a few seconds, hard to do in the middle of a song).

There are 670 different sounds (including 16 drum set). As I've seen elsewhere about the keyboard in general is fun at first but you get tired quickly, but it can still be used! And many are still interesting.
We just set the resonance of sound (10 levels, the default being 6).
200 dynamic drum machines (each has a phase 1, a wagon, a phase 2 and a conclusion that can enable low hanging playback at the touch of a button per game).
There are also 8 free places for sounds to sample'm even including 3 rhythms (also the keyboard sampler but I've never tried this feature).
It also virtually little divide the keyboard into two parts, with his per game.

There is a user-side audio output (headphone or amplifier), audio input (I have not tried yet) to play another music, a microphone input to sample sounds (not tried either), a USB and of course a plug for the pedal.

The touch keyboard is quite realistic, I could compare that with two acoustic piano: one had a touch different enough that it becomes disturbing in the beginning, the other had a feel much closer. Overall the race of a button should be more homogeneous on the keyboard as on an acoustic piano but it's a detail that matters little when it starts. The "heaviness" of the keys is very light gradient: heavier in the bass, lighter in the treble.

The number of its forces often noted on each partition where one uses a special sound its number (although in general, the first sound is a piano that suits just about everything), a paper list is provided and Selection is made via a keypad (be careful to select the "tone" before changing his, often an oversight because rhythm is selected by default and it does not necessarily make them count).
With a little practice the pattern of effects and other parameters is simple enough, but the manual is necessary at first to avoid getting lost.

The manual is pretty clear about it and complete even if we sometimes look a bit before finding the information you seek.

The piano sound is very satisfying: normal piano, grand piano, classical piano, piano rock's moods quite different and all with a good record.
The other sound is often unnecessary but some are very interesting (I think srting leads and synth), I play almost exclusively with the sounds of piano, but I think the palette of choice is exploitable.

The keyboard react well depending on the speed of pressing keys, I have not had a problem with that (although I have a lot harder not to "tap" the notes on the keyboard sound in my music school), this reactivity is adjustable (4 levels): default level 1, level 2 and 3 make the notes more "soft" for the same typing speed, at level 0 there is no difference by typing speed ("strength" of the sound produced is quite large, as if you typed the button hard enough, and is not adjustable). No aftertouch.

There are few effects, 10 levels of reverb, chorus 5 levels (I never use), the functions of transpositions that can be extremely helpful and sympathetic accompaniment features but no more.

I use this keyboard for almost 2 years now, this is my first keyboard and I am very satisfied. I do not have much of reference regarding the quality / price but it seems very correct.

What I particularly like: The fact that it is rather easy to carry and use in a manner "temporary" (a simple bag can carry it easily, it fits in a car without breaking the head too and fits perfectly a foldable foot when the foot remains fixed at home, you just lay towel or something to raise the rear of the keyboard if you do not want to unscrew the metal bar whenever I use another foot ).

What I find unfortunate: the jack-user driven, very well placed to connect a headset, but much less to connect a receiver (the volume is sufficient to repeat as a group but not for a concert, even for a small Anniversary Party)