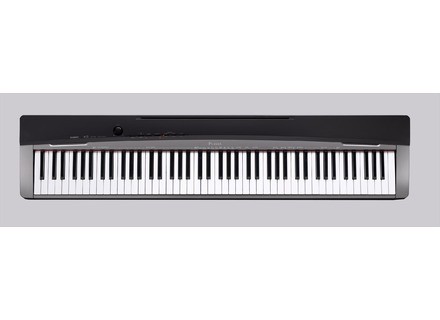 PX-130, Digital Piano from Casio in the Privia series.

View other reviews for this product:
This generation of Casio digital pianos has made me a huge proponent of them, over even the popularly preferred Yamaha pianos and certainly over the Korgs. I own the PX-330, but when in Thailand, with nothing to do but shop for pianos, I kept on gravitating towards the PX-130 over its competitors time and time again.

First off, it's nice to know that there are two headphone jacks, so two people can listen or play without disturbing anyone. Next, it does include USB MIDI connectivity to the computer, so it can be used as a MIDI controller. It is an entry level piano, and as such lacks pitch bends and mod wheels. However, considering its older brother, the PX-330 fitting where it fits (see my review of the PX-330) the PX-130 fills a very nice niche: people who just want to play piano! The PX-130 features 16 sounds, but the piano sounds are the only ones that really matter anyway, so that's what I'll be reviewing!

I think this is one of the most simple to use keyboards on the market. The main features, like the pianos, are accessible with their own dedicated buttons. However, several functions are located on the keybed. You just pair the function key with the labeled key, and BAM! Instant gratification. The nice thing about this keyboard is that it makes it easy to do these things, without overwhelming the user with these functions. Despite the fact that its older brother, the PX-330 (which I own), has more dedicated controls, the single-layered simplicity of the 130 definitely makes it much more workable than the 330 I own.

The fact that they are labeled also gives it a distinct advantage over the Korg SP170. The SP170 is a very appealing machine aesthetically, but it cannot compare with the Casio's usability in any way at all.

Since this is a very basic piano, Casio just jammed the 16 cream-of-the-crop-every-piano-needs-these-sounds sounds into it. That means that unlike my PX-330 and its largely inspirational, but sometimes pathetic and superfluous sounds, pretty much every sound on the PX-130 is usable, although quite corny at times. (I'm looking at you, organs.) The best ones are obviously the pianos, but the first E.piano and the strings are also quite good. There's really nothing else to say about the sound, except that the reverb and brilliance are also adjustable via the function key.

The touch and feel of the PX-130 is excellent. Despite Yamaha's reputation for holding that throne, I find that because Yamaha makes acoustic pianos, their digital pianos strive to emulate the keybeds of their acoustics. Personally (it may be different for all of you), I find the Yamaha pianos to have very abrupt action. Crisp, but very grating at times. The PX-130 has just that right level of sponginess. Growing up on a Steinway baby grand, I appreciate lightness, but the Yamaha's in my opinion take it a bit too far.

I also want to mention that the PX-130 has a standard 128-note polyphony. The Yamaha P95, which costs more, has only 64. This difference can be crippling when playing thick passages or when layering different instruments.

The PX-130 is a great way to get into the world of digital pianos. It offers a no-frills experience to those who just want to play, and a simple and intuitive interface for those who want to tweak just a little bit. If you're the more adventurous type, check out the PX-330, which for all intents and purposes, is the same piano with more buttons and sounds and a better stage-piano flair.

I still encourage you to try the other brands, as pianos are quite subjective. In this generation, the Casio line dominates the sub $1k market for me. However, it is up to you to decide.
Did you find this review helpful?yesno