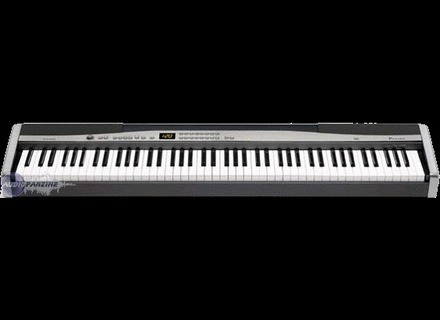 PX-300, Digital Piano from Casio in the Privia series.

Value For Money : Excellent
View other reviews for this product:
That says it all down ... (And yes I'm lazy). Except that my bill will be different since this keyboard is a very good price / quality ratio.

After nearly a year of use these are faults that reappear. I had problems at the connector (line out failed => sound + in + low). I did repair (fortunately for nothing). The verdict: in-house manufacturing is limited. Apparently, a chemical would cast welds causing a short circuit.

It's true that if you want to tweak, use is not great. But personally, I use this keyboard mainly for a heavy touch. "Heavy", so to speak, of course, nothing can replace the feel of a real piano. But it's still one of the best ways to have a good touch. From there, the important criteria are that the weight is more than reasonable (12.5 kg). It can be worn alone without worry. And another point pleasant it is amplified. A significant comfort on stage when the scales were sloppy, we do not have a return or when there is no sound when other zicos to swing (the keyboardists know what I mean). And what's more annoying than having to lug an amp when it's hard to boeuffer the home of friends.

For me, this keyboard is a good tool for those who want to walk with and can also work at home quietly thanks to the hundreds of rhythms that he has. It changes the metronome and it avoids turning on the computer to launch sequence. I have not tried the option of automatic accompaniment used more for work at home as the scene, as the rhythms (in fact I am surprised the weak point of the previous opinion criticizing the "fill" and "stop" is next to each other ... no importance, which would have the absurd idea of ​​using this kind of pace on stage !!?).
In short, this keyboard is not practical to use with respect to all the unimportant things, when to use it most: the stage. Therefore, its weight, its small speakers and the small number of buttons (which becomes an advantage on stage) catch up instantly.

Finally, we can note a significant point regarding the use of a headphone. First, you can connect headphones to portable (small entrance). No adapter needed. Second, there are two headphone inputs. The utility? Teach piano without shit neighbors or with several students at a time.

I use it much now as master keyboard that fills the gaps in the sounds and offers me a flexible solution at the transport level (important concert => casio computer rehearsal + => casio alone). Is it because there is also a manufacturing defect? I know nothing but the use of the sustain pedal generates three signals noon. One of the desired channel and on channels 2 and 3. Great! Of interest to those using multiple keyboards masters ...

Sounds good. I'll be honest, I'm a big user of the rhodes and I must admit it is rather well rendered here. I do not attach too much importance to the rest but quickly flew with the sounds, I find them quite good .... other than the piano. I have an old Clavinova (CLP-840) with the piano is much better. At the same time, a view that the keyboard is used on stage with other musicians and amplification, no doubt it will do but its good .... when you turn the keyboard and we did our usual agreement fetish, you can be disappointed with the result.

I bought it to make the scene using mainly the rhodes. However, this keyboard is very light, good touch, it has good sound and speakers of Rhodes, its price is one of the lowest in the market regarding this type of keyboard ..... the rest provides a bonus denied the use I had planned to do. I can only be satisfied with my purchase. For me the big downside is with sounds. I would rather have the same keyboard with a good sound rhodes / piano rhythms and not for example. Anyway, I tested a lot and have a keyboard with better sound means a higher price of 200 € (one-quarter the price of the Casio!), A higher weight and fewer features .... .
See the source
Did you find this review helpful?yesno
Cookies help us improve performance, enhance user experience and deliver our services. By using our services, you agree to our use of cookies. Find out more.