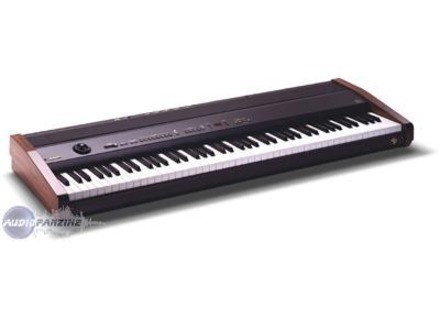 7 + 8 families octaves of sound, in every family there are six sounds and the possibility of adding reverb and / or effect and / or a layer. 3 modes for a touchdown. connectors: headphone jack, stereo input / output in jack6.35, dawper pedal and soft, in / out midi.
a joystique (+ pitch bend modulation), and a sequencer ... in fact I pRP 7 (the only difference with the PRP 8, is that I have no amplification system with 2 * 6w)

The hit is the same as the promega3 ... hammer action, I find nothing wrong. I can not comment use twelve o'clock because I do not use it again! In any event with headphones ... it all night ...
No need for any manual is too simple.

Sounds, aaahhhhh ... it's great. I use a bass amp ('torque' with a little breath that ammene a vintage side ...). So let the sounds in families: a + gand piano pianos ... I'm pretty hard, I find a lot ... the headphone's going to be near ... always! ... the Electric Piano The Rhodes is well done with a true saturation. But if you like Chick Corea, and many you have exactly the same sound as "light as a feather," "Friends ",... the key boards are good too ... And then the organs, AAAAHHHhh a drug that thing with the wheel that mimics the Leslie ... Well, that's it! ! ! I do not see the point of guitar sounds (if you want a guitar sound it takes a true! not) the same for the violin (the harder it anyway). and then, the trick to make mats, tablecloths uh ... Finally there is the same sound as the pub royal canine (to be mistaken, by the way it happened once ...).
The effects are real, except the fucking split: the guys who designed it are crazy ... they do a very good bass sound (which is not easy) and some split it is coupled with a charley ... shit!

I have already for a year, and if there was a counter in hours ... in all night! !
I love the sounds that I use ... and for the price, I would do this choice because the competitors have not even touched.
See the source
Did you find this review helpful?yesno
Cookies help us improve performance, enhance user experience and deliver our services. By using our services, you agree to our use of cookies. Find out more.