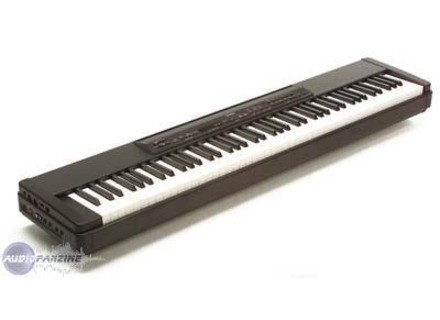 P-80, Digital Piano from Yamaha in the P series.

Product replaced by the Yamaha P-85.

View other reviews for this product:
The Yamaha P80 is a full size electric piano with 88 weighted keys. It is easy enough to transport if you wanted to, and is big enough to provide you with the full flavor of a real piano without actually having one. It’s got all sorts of different sounds, but the grand piano ones are definitely the most realistic sounding. Other sounds that it has include electric piano, organs, harpsichord, strings, guitar, choir, and a number of others. It also has built in reverb and other effects, as well as a metronome and a couple of built in tracks including a demo.

If you’re familiar with the general make up found on electric pianos, you’ll definitely feel at home here. Nothing about the P80 is difficult to understand, as everything is pretty straight forward. Choosing the different sounds is as easy as hitting a button, as is the same with the built in reverb and other effects, which include chorus, a phaser, tremolo, and delay. You can also change the sensitively on the touch and transpose. I haven’t had a need to use the demo or the built in recording features, but certainly they are nice to have there just in case. The overall feel of the P80 is definitely realistic and is about as close as you’ll find to a real piano. A manual won’t be necessary to use most of the features, but if you’re looking to learn it inside and out, you might as well have it handy.

As I stated earlier, the grand piano sounds are definitely the most realistic sounding tones on the Yamaha P80, but I can’t complain too much about the way the other sounds come across. Some of them are a bit cheesy sounding, as is the case with the electric piano sounds, but others are pretty realistic like the harpsichord. The effects are nice to have, but I haven’t really used them other than the chorus. While the effects do sound pretty good, you don’t have any parameters for them, so what you hear is what you get…

The Yamaha P80 is a very solid electric piano. While you would think that this would be a bit cheap, I guess the real feel and body of the piano make it a bit more expensive. The price still isn’t too bad when you consider what the price of a real piano costs, but at the same time you could put together a better sounding collection of sounds on your computer with a MIDI controller for the price of the P80. Still, if you’re interested in a portable electric keyboard with a very good feel and sound, the P80 is fine choice.