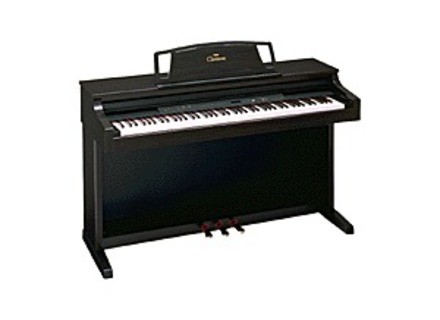 View other reviews for this product:
This is a full size digital piano in all black with the standard array of sounds (2 grand pianos, 2 E. Pianos, Harpsichord, Pipe Organ, Strings) and variations and effects for each. There are 4 selectable Reverbs, 4 different touch sensitivity levels to tailor the response of the instrument to your particular playing style, an effect button (generally adds chorus), and a split button to assign two sounds to the upper and lower registers of the keyboard. It also features a function button that allows players to tune it to pitches ranging from 436Hz to 447Hz. Last but not least, there is a standard metronome with adjustable beat counter and volume, and a record button. There are two tracks available to record to. The back panel is fully featured with MIDI In/Out and Thru, auxiliary inputs and outputs, as well as two headphone jacks.

This was acquired quite some time ago in the mid '90s for some $2,000 (roughly). I've been using it as a home and road piano ever since in the hope that I will soon be able to have my very own stage piano, one that travels a little better than this piece of furniture.

When it comes to digital pianos, Yamaha has always had the best sound and feel for the classic grand piano tone. There aren't many instruments that have come close, although the Nord Piano is in the ballpark. Overall, the sounds alone do it for me. The interface is incredibly simple and intuitive; anyone, even without any prior experience with a digital piano, could work around the buttons with ease. I also like that I can take it apart into two simple pieces, which makes it relatively transportable, even though it weighs in at almost 75 lbs. I can still get a good enough grip on it to carry it to the car by myself.

My only complaint is the lack of a fully open jazz organ (there's a jazz organ on there, but not a B3 model) or a choir sound. Other than that, it's a fantastic digital piano and well worth whatever they sell for now.

No problems with it whatsoever in well over 10 years.

I've had no problems with it, and it's served it's purpose all these years well. I'll continue to use it to record, practice, and gig with as long as it lasts and as long as I have the means to transport it.