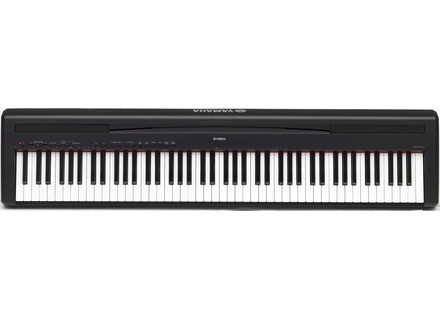 P-95, Digital Piano from Yamaha in the P series.

View other reviews for this product:
The P95 is a fine digital piano; it may not be as entirely full-featured as its peers, the Casio Privia PX-330 and the Korg SP250, but I believe its piano sound does indeed surpass either of the other two's. Unfortunately for the poor P95, Yamaha has a habit of crippling their entry-level products with convoluted and arbitrary limitations, like 64 note polyphony. I have no idea why Yamaha didn't decide on the standard 128 note polyphony.

Most playing is fine; but when I was comparing it to its peers (I ended up buying the Privia PX-330, and have written a review on that as well) I found that notes did in fact drop out when playing through heavier and more saturated passages in the music. In fact, when you're trying it out, since pianos have 88 keys; gliss from the bottom to the top or top to bottom on both the white and black keys and you'll hear the ever jarring note dropouts.

Finally. Don't make me mention the lack of 1/4" outs. Do not presume to gig with this guy, especially for reasons explained in sound. Thank goodness for the MIDI connections.

This piano does get lots of points for being incredibly easy to use. Everything from metronomes, to sound selection, to layering; it's all very intuitive to use. Nothing much to be said here.

The sounds are fantastic. The piano sound is the best in its class by a respectable margin. I, however, am not a huge fan of the touch. I find it to be a little bit too light; it doesn't feel quite weighted. It seems to be closer to semi-weighted. This was quite the turn-off.

It's a shame that without the necessary line outs, that the built-in speakers aren't better. They distort fairly easily.

The Yamaha P95 is a perfectly respectable board, until you discover Yamaha's painful limitations imposed on it. You could tell me that I should like it for what it is, and I do. You could tell me I am bitter about the piano because it wasn't what I was looking for, but the truth is that if it is designed to compete with full-featured pianos, Yamaha cannot arbitrarily take out important features to drive the consumers to the next model up while still hoping for it to be a viable option against its peers.

So before you buy a P95, know that it's not a flexible machine. It sounds good, but it can't do much with it when its hobbled by Yamaha's ridiculous business model. Anyone notice the new MOX synthesizers have 64-note polyphony? Absurd.
Did you find this review helpful?yesno