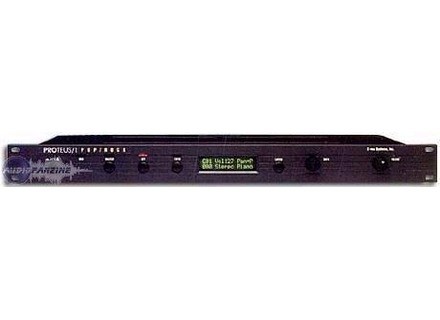 View other reviews for this product:
Everything is already said in the other view
I can add one thing: his palette for addressing all kinds of music: try the DMO and ... close your eyes!

In a jiffy you access all the vital functions of the device.

When the emulator III starring in a one rack U.
chantillonage remains that the 90s (it was not the era, 2GB of ram in the computer, 1 Terra HDD and 512 MB video card in).
But what good work!
it sounds! the loose guitars, fretless bass, sound grooves, flutes, violin with the bow attack, the sins of powerful brass, ethnic sounds.

I've since its release (a single power supply failure after an extended stay in a wet basement).
I bought everything that came out as a synth: the rest is!
16 midi channels when my DX7 had only one with any sounds ... uh numer (d) ic.

Proteus XR? a rvolution!
See the source
Did you find this review helpful?yesno
Cookies help us improve performance, enhance user experience and deliver our services. By using our services, you agree to our use of cookies. Find out more.