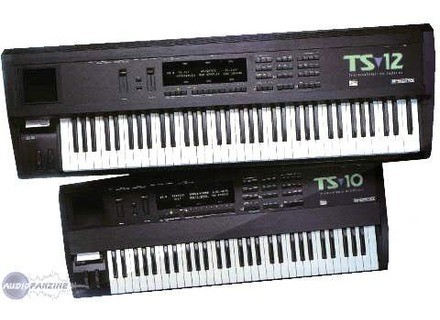 View other reviews for this product:
This is a keyboard 61 touch-sensitive semi-weighted with aftertouch
And it's not the aftertouch low end, if you play five notes at once and that you test the aftertouch on only one of its notes, it will be the only one taken into account. Which confers a high accuracy in the game

It has a pitch, bender, two small buttons on the left side to make three variations of its in full play

For connectivity, it's classic
- MIDI IN OUT THROUGH
- L & R output with effect
- Output L & R no effect
- Headphones
- Sustain and expression pedal
- Supply house: so just a power cord

for the rest, do your research on the Internet; o)

The interface is really well thought out.
The use of different possibilities is very intuitive and very fast! very important scene.

For the edition, it is necessary to tame the beast. it can be confusing in the beginning, but once taken in hand, it becomes a real pleasure.

I have a manual in french that I find pretty much done. The various modules are discussed in chronological order.

I have this synth since 1999, and frankly I am satisfied with its sound.
We are always more educated to the sounds of synths most common (Roland, Korg, Yamaha ...)
The Ensoniq really a particular grain

Fraudra he does not hesitate to return to the edition of new sounds. To my taste, the sounds of plants are mostly too crystalline. But it is quite easy to find your happy by fiddling a little.

When I buy, I had an expander Korg 05R / W and a Roland A30 master keyboard, and I found some nice korg sounds when I played alone, but soft enough for me to join my group

The Ensoniq does not have this pb, it has an impressive fishing. I use a lot of organ sounds. Finally ... the ones I made up: o) and then what a pleasure to control the leslie bender with!

A built-in sequencer. It may be convenient but personally I'm a fan of cubase.

Otherwise, I'm a little disappointed with the "sampler" that owns Ensoniq. If you do not have a sampler Ensoniq brand, it will not be possible to create samples for the TS10.

Last thing ... I find it really nice, very solid in alluvial brushed black. It's really the kind of animal that does not go unnoticed on stage: o)

I do not think I ever part with it. I'm going to edit my sounds more and more because each time he surprises me: o)

To summarize ... A pure keyboard scene!
See the source
Did you find this review helpful?yesno
Cookies help us improve performance, enhance user experience and deliver our services. By using our services, you agree to our use of cookies. Find out more.