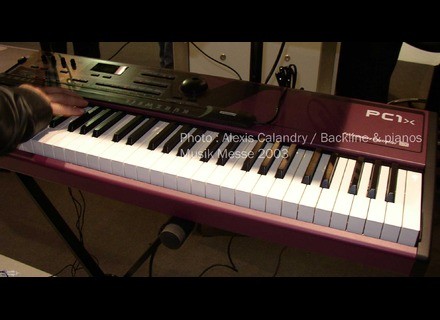 View other reviews for this product:
88 keys with hammer mquanique, many sounds effects, Controller, etc..

The keyboard seems to have a shorter stroke than the Fatar, but is comparable numriques all pianos I've tried so far. Thanks to SETTING THE sensitivity can quickly adjust the keyboard rponse his style of play, which is especially apprciable many sounds and ragissent the VLOC / or have several layers.

on the other hand, select the accommodation requires a sound long enough: to choose a bank, three buttons light up red or green for three banks and two times for these same sounds, it's square ment of hell: you must choose one of the sixteen groups with eight buttons red / green, then among the sounds of the group with, in addition, a green LED indicating the prsence sound in deuxime layer (Power key are green). As difficult to explain that understanding ... Anyway, after three weeks, I start getting used to.

The manual is full trs, except there is no list of patches and setups. There is a list Retailer, but half a score of pages, then it would have t practice having a rcapitulatif classs of all the sounds in each bank and for CATEGORY to choose a look.

The big highlight of the keyboard sounds! I had bought at dpart for acoustic piano sounds, but what a surprise by browsing through the banks ... The pianos are fabulous (albeit a little too like as presets, which would be fewer p), the electric pianos, and all acoustic instruments trs well reproduced with a standard dynamic (even in compared with Wavestation and my JD-990). But what really is skotch analog sounds and drumkits simply standards!

The part s'avre plutt powerful effects, and even voluntarily limit edition by the manufacturer, leaving Access in paramtres essential.

In edition of setup, programming Controller is impressive, and I rve edition of the K2600 ...

I use this keyboard for a month, and I am satisfied for now compltement. I only regret not having enough time to explore the possibility of shipping setup and go once more sound banks ...
My set includes several Japanese machines and I must admit that the PC1x sounds better than the whole. Obviously the pianos are beautiful but it is mostly the rest of the sounds that surprised me and I would recommend this keyboard plutt another piano numrique all those who still hsitent between DIFFERENT MODELS.
See the source
Did you find this review helpful?yesno
Cookies help us improve performance, enhance user experience and deliver our services. By using our services, you agree to our use of cookies. Find out more.