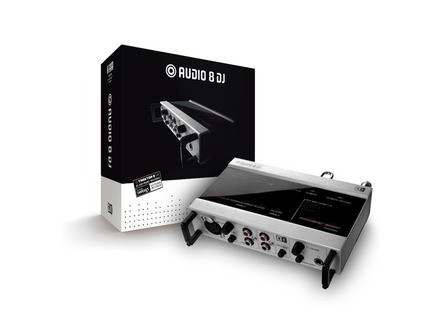 View other reviews for this product:
What technical specifications motivated your choice?

The requirements to use in Traktor timecode. I did not have much choice, traktor both the software I use for a packet dja time, I saw no change, so I buy this card its eyes closed.
Level connectivity:

1 XLR input on the front, a little gadget, but still useful, its power can use it as a sound card, and not as a sound card just to use Traktor for timecode vinyls.
An output jack for headphones, too asser gadget as in good logic, that of using the mixer.
And then 8 RCA inputs and 8 RCA outputs for vinyl, CDs or scratcher (well then you plug what you want it).

Installation is no problem it?

Native Instruments makes it hard on this point. Audio 8 is probably the sound card with the fastest installation, technical problem never, software, or other. The connections are also a childlike simplicity. If you use the Native Instruments cables for the connections table and platinum mix, well ... There's just follow the colors, not more complicated than his.

Have you experienced any incompatibility?

No, never, yet I test on all operating systems as possible, XP 32 or 64 bits, no problem, Vista 32 or 64, idem, Windows 7 32 or 64 bits, same fight Linux? ... No problem too, passes on asio drivers worry free, while God knows how it can be to run a Linux driver asio without shooting. (In Ralite is THE FIRST sound card that works directly on Linux, without my config anything of prcis).

The 8 audio, so it's a certe flawless, works everywhere ...

The drivers are stable?

Nothing is more stable, it never crash, and I think they never will plant. And I do not always friendly with k'audio trs t 8, I happened to unplug in full operation, and just reconnect APRS, and although nay, a After plugging it back directly, traktor indifrent left.

Ever blue screen on windows, I prcise asser because it is common for drivers audio blue notches produce more violent changes of bitrate, or latency.

Are they often put day?

Relatively yes, another cot she did not specially need the drivers today are so stable, the days are only put added functions in the interface configuration, nothing more.

What software do you use most often?

Traktor. Love me but it happens to use it with Ableton Live, or reaper, it is still the trs good job.

What you get lag?

Traktor in 1.5ms, no crpitements, lag or whatever, ultimately it's the most difficult track of the time it ordindateur, not the sound card.

Since a year or so.

Most is his strong body iron is made to withstand many shock, native Besides, this point put forward on the site. Admittedly, it is important for the use which it is intended. This means often be carried through Dj mix.

The ratio quality price is about right, it could be less CHRE, but the Native Instruments, not give. But there are some against the solidity and stability cot practice, and only because there is no equivalent for Traktor (normal, NI are not crazy).

Exprience with, you will do again this choice?

- Strength
- The stability of drivers
- The look
- Ease of use

- The configuration interface of the ASIO driver is missing setup my taste, I love the possibility to route the output via a virtual mixer, unfortunately we freeze out the use of basic. That said it's not too late to do so.
- A maximum bitrate of 192 000 herz would be put-friendly (even if I just chipotte)
- A little too perfect, how NI will they do to release a new version ... lol.
See the source
Did you find this review helpful?yesno
Cookies help us improve performance, enhance user experience and deliver our services. By using our services, you agree to our use of cookies. Find out more.