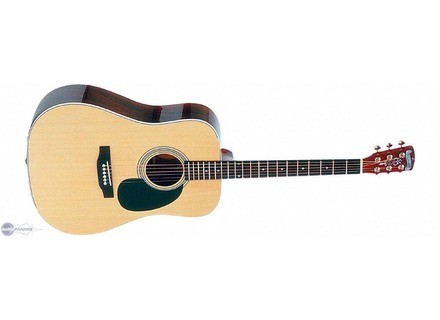 View other reviews for this product:
The Blueridge BR60 is a dreadnought style, steel string acoustic guitar. I don't own this guitar and haven't used it in the studio - I've only used it to try it out and to practice a bit with it. I believe that all of the Blueridge guitars are made in China, but I was definitely surprised to learn this as they seem like they could have been handcrafted. This isn't an acoustic/electric, so there aren't any pick ups or setting controls available here.

The overall feel of the Blueridge BR60 is probably the most impressive thing about it. It has a similar feel to the other Blueridge guitars that I've used like the BR73, as it is very fluid feeling and it is easy to play along the neck. The fretboard is made out of East Indian rosewood, which I don't know too much about, but judging from the way this guitar feels, it is a very smooth material. I don't remember the guitar being usually light or heavy, and the shape of the guitar is standard for a dreadnought. I was immediately happy with the bright and full sound I got from it as soon as I picked it up and starting playing.

I don't like the sound of the Blueridge BR60 as much as I did the BR73 for whatever reason, but the BR60 definitely still has more than a respectable sound. All of the Blueridge guitars that I've used have a very bright sound that seem like they could cut through very well when playing with other instruments. Unfortunately to date I've only used the BR60 on it's own as a solo instrument, so I can't say how well it would blend with other instruments for sure. I would say that the BR60 is best for use in the studio since it isn't acoustic/electric, but again have yet to have the chance to use it in a recording studio setting.

Blueridge is a company that I wasn't even aware of until somewhat recently, and while the BR60 wasn't my favorite of all the models that I tried, it's still a very nice acoustic guitar. I was really blown away by some of their other models more than I was the BR60, but that doesn't mean that I would encourage those interested to try it out for themselves. I really like all of the Blueridge guitars that I've used, as they are a little known company that packs a lot of punch...
Did you find this review helpful?yesno
Cookies help us improve performance, enhance user experience and deliver our services. By using our services, you agree to our use of cookies. Find out more.