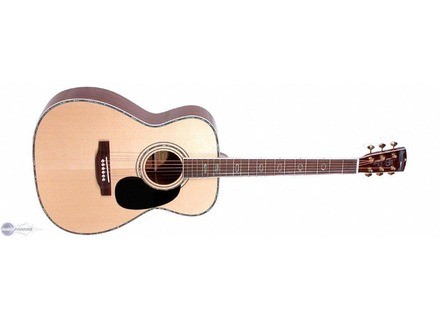 View other reviews for this product:
The Blueridge BR73 is a dreadnought style acoustic guitar, boasting a slightly slimmer than average body. It isn't an acoustic/electric, so it doesn't have any pick ups or setting controls, but this isn't a bother to me as I used it just for practicing and didn't need any amplification. It is made up of very sturdy and nice looking good, with a nice feel to match it...

Playing the Blueridge BR73 was the first good thing that I noticed about the guitar, as it has a very fluid feeling neck. I really enjoyed the action on the guitar, as it was an overall pleasurable experience to play. I felt like I had a lot of control over each of the strings and could easily navigate up and down the neck when needed. The body of the BR73 is smaller than average, as is the weight, which is a nice thing as it is easy to carry around. Getting a nice sound presented no problems to me at all...

The overall sound of the Blueridge BR73 is vibrant and bright sounding for a dreadnought acoustic guitar. It is great for bluegrass and other genres where you would want that jingle on the high end. I haven't done any recording with this guitar yet, but I'm quite eager to get it in the studio to see what types of sounds I can get from it. I don't doubt that it will translate well, as just from playing with it for a little bit I was able to get a good idea of what it is able to do and what it isn't.

I'm pretty new to Blueridge Guitars, but after playing a few of their models, I can say I've been overall very impressed. The BR73 was the first model that I tried, and is up there with the best bang for your buck guitars that I've seen. The price was very reasonable, as I was very surprised to see this type of guitar going for this price. I played the guitar before seeing the price, so you can imagine my amazement. I haven't seen Blueridge Guitars in all that many stores, but if you come across a store that has some, definitely check out the BR73 and their other models, as I think you'll be very glad that you did.
Did you find this review helpful?yesno
Cookies help us improve performance, enhance user experience and deliver our services. By using our services, you agree to our use of cookies. Find out more.