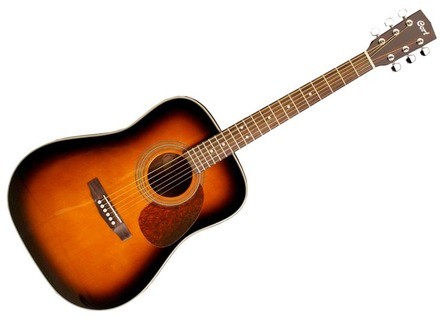 View other reviews for this product:
Made in China.
Dreadnought acoustic guitar folk type.
20 frets.

The neck is quite nice, not very late like all folks (that is not a log eh!)

Access is restricted to treble: 14 frets are easily accessible after they are on the body of the instrument. Because she has no cutaway, after the 17th box deient it quite difficult.

For me, the shape is fine but the box is big enough (Dreadnought what). It's not really a problem but I think that a jumbo suit me better because they are slightly less spacious.

Sounds: NI-CKEL! For flamenco, jazz, country, and even the metal acoustic music (much like you see in Metallica or dissection) I'm thrilled. Frankly it's not ecore a Taylor or a Gibson but for € 200 or even deserves a medal!

The two years it will be that I have (I bought it shortly after my M-50 electrical). Once I thought about selling it to pay me an electro-acoustic, but on balance I'm going to buy the electro-acoustic and still keep it because frankly, guitars like that there no mass for that price.

I looked for quite a while before choosing one. I will cover a guitar acouqtique to play music everywhere (as in high school for example) and audibly heard (as I did not micro-amp for the local electrical at the time).

Level money, it's enough to salivate at the shop window. Excellent.

I will not repeat this choice simply because I prefer an electro-acoustic (plugged in and playing with a cut-off for the last fret) but it NHANG not that it overwhelmed me after three agreements. Those who want a good acoustic guitar without paying too much, try this it's worth it!
See the source
Did you find this review helpful?yesno
Cookies help us improve performance, enhance user experience and deliver our services. By using our services, you agree to our use of cookies. Find out more.